Brussels accused of hypocrisy over stances on Crimea and Kosovo 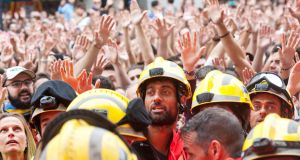 People protest at the Catalan government’s headquarters during a general strike in Barcelona on Tuesday, following Sunday’s independence referendum in the region. Photograph: Robin Townsend/EPA

Russia and Serbia have lambasted the European Union for its reaction to Sunday’s independence referendum in Catalonia, accusing it of hypocrisy over its very different attitude to separatist crises in Crimea and Kosovo.

Russian politicians asked why the EU did not condemn Spain strongly for police violence which injured hundreds of Catalans on Sunday, while sanctioning Moscow for taking Crimea from Ukraine after a “peaceful” referendum in 2014.

Belgrade, meanwhile, was furious that Brussels rejected the Catalan referendum as illegitimate, having approved Kosovo’s 2008 declaration of independence and seen most EU states recognise the sovereignty of the former Serbian province.

“I see and read what is happening in Catalonia. And Europe will say something to us about the referendum in Crimea and the protection of human rights,” Russian foreign ministry spokeswoman Maria Zakharova wrote on Facebook.

“After the events in Spain and Brussels’ reaction to them, all these Euro-summits extending sanctions against Russia will be like Bruegel’s (painting) ‘The Blind Leading the Blind’.

The Kremlin declined to comment on what it termed an internal matter for Spain, but Leonid Slutsky, the head of the foreign affairs committee in Russia’s lower house of parliament, called Catalonia’s referendum a “litmus test” for the EU.

“Will Brussels agree with the right of nations to self-determination, as was convenient with Kosovo, or will it continue to insist on the principle of territorial integrity” as it did with Crimea, Mr Slutsky asked.

Describing the West’s approval of Kosovo’s independence as the opening of Pandora’s Box, he added: “Russia warned . . . that sooner or later it would lead to the ‘parade of national sovereignties’ that we now see in various parts of world.”

Serbian president Aleksandar Vucic called the EU’s positions on Catalonia and Kosovo “the best example of double standards and hypocrisy in world politics”.

“How did you proclaim the secession of Kosovo to be legal, even without a referendum, and how did 22 European Union countries legalise this secession, while destroying European law?” he said.

“So, how come Catalonia cannot and Kosovo can – Serbs will never be given an answer to this.”

In fact, 23 EU members – including Ireland – are among more than 100 states that recognise Kosovo’s independence; Spain, Romania, Slovakia, Greece and Cyprus do not.

The European Commission said the cases of Kosovo and Catalonia were “not comparable”. Kosovo broke with Belgrade after a brutal 1998-9 Serb crackdown on Kosovar Albanian rebels and civilians that claimed thousands of lives, and was only halted by Nato bombing.