Angela Merkel insists she has options, but her party’s match has already been made 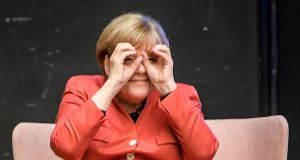 A week on from the federal vote, it’s out with the German election posters and in with the veils for the ritual mating dance.

Grabbing power in Berlin resembles the rules for pulling in the city’s clubs: adopt an evasive demeanour, equidistant between wallflower and gagging for it.

Chancellor Angela Merkel has warned her MPs – while no doubt hoping for a leak – that there is “no automaticity” to the outcome of the coalition talks. While she insists she has options, the match has been made.

A week after scoring the worst election result for her Christian Democratic Union (CDU) since 1949, the most likely outcome for Merkel’s fourth term will be a so-called Jamaica coalition, based on the party colours of her CDU (black), the liberal Free Democrats (yellow) and the Greens.

And let’s not forget the chancellor’s tried-and-tested ability for making coalition lemonade from election night lemons. In 2009, her CDU finished election night less than a percentage point ahead of their most recent result. Once in power, though, she was an unquestioned authority.

But times have changed and even her close officials admit this is her last spin on the merry-go-round. While this is traditionally the phase in the cycle of power when lily-livered rivals are most tempted to throw their leaders off the roundabout, the CDU is not a putsch party and has no history of toppling sitting leaders.

Merkel wants to serve a full four years, drawing equal with her mentor Helmmut Kohl. But, to appease the impatient, she will have to start preparing a successor.

Not in the running: Wolfgang Schäuble. He has agreed to relinquish the finance ministry for the role of parliamentary president, a position with domestic political standing if little clout.

For the 75-year-old Bundestag veteran, first elected in 1972, the loss of prestige comes with compensation: an opportunity to deploy his dry, devastating wit in the chamber against the anger of the Alternative für Deutschland (AfD) novices.

Schäuble had barely agreed to the move, which pre-empted demands for his ministry by the Free Democrats (FDP), when FDP leader Christian Lindner set tongues wagging by tweeting: “Germany doesn’t need a new finance minister, it needs new finance politics.”

This may be nothing more than a coalition talk smoke bomb, given the considerable policy overlap between the FDP and the CDU on finance and the EU.

To date, the FDP has been even more vocal than the CDU on its opposition to a general purpose euro budget, though party officials admit this is about playing to the gallery.

Off the record, even the liberals can envisage the kind of euro fund and finance minister floated by the CDU leader, albeit one with more modest financial means and political clout.

Like Schäuble, any FDP finance minister will block any moves for Greek debt relief, but they are not opposed to renewed Franco-German proposals on the harmonisation of corporate tax, insolvency law or even a European Parliament candidate list.

Like the Greens, who are likely to take the senior foreign position in the coalition, the FDP backs greater European co-operation on defence and security, as well as more digital investment and climate protection, though they differ on the details.

Even with the new populist challenge from the AfD in the Bundestag, the greatest risk for Merkel may yet prove to come from within, not without. The CDU’s Bavarian sister party, the Christian Social Union (CSU), is smarting after losing 10 points on Sunday, even more than Merkel’s CDU.

They feel they were punished by voters for falling into line behind Merkel’s moderate line on refugees. A year before Bavaria’s state election, the CSU will want the federal interior ministry as a launchpad for loud migration policies to win back votes from the AfD.

On Thursday in the Frankfurter Allgemeine daily, CSU man Manfred Weber, head of the conservative EPP grouping in the European Parliament, predicted that talk of “refugee policy, fixed and limited contingents have to become the rule”.

Meanwhile, Merkel’s outgoing coalition partners, the Social Democrats (SPD), are coping admirably with their worst-ever result of just 20 per cent. After running a centrist election campaign, the party has embraced failure and opposition with traditional left-wing enthusiasm.

And while the luckless Martin Schulz has stayed on as party leader, the SPD force to be reckoned with is the new parliamentary party leader, Andrea Nahles.

The ex-labour minister has vowed to reinvent the SPD in opposition, including, if necessary, lifting the taboo on co-operation with the Left Party.

“One way or the other we have to agree on our joint responsibility for our democracy,” she told Saturday’s Der Spiegel magazine. “I am ready.”