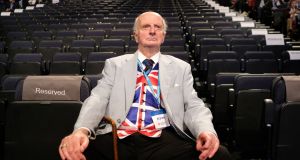 A delegate at the Conservative Party conference in Manchester, England. Photograph: Stefan Rousseau/PA

Your job is never easier, your colleagues never kinder, your worries never more trivial, than when you imagine life as Theresa May.

Since the election she almost lost to the Labour Party, Britain’s prime minister has writhed around in triage as her nominal juniors decide whether she can and should survive.

Her scheduled indignities in Manchester, where the Conservatives gather for their annual conference this week, would break most people. She must watch as ministers use their stage-time to bid for her job. To cloak the party’s (in fact, the country’s) indecision over how to leave the EU, she must drum up interest in such domestic marginalia as her new ombudsman scheme for landlords. She must soften the hard Brexit noises she made this time last year. When her foreign secretary, Boris Johnson, frames this as betrayal, she must fire him at some risk to herself or else lose whatever residue of credibility she has left.

The froideur between these two Tories is a delayed version of the debate the party ducked in its post-referendum leadership contest: what kind of exit, over what timeline? And while Johnson is wrong, even callous, in his impatience for an absolute exit, he is right to sense that delay suits the Remainers.

Once Britain enters a holding pen between membership and non-membership, as per May’s plan, the chances of exit ever happening fall. The base case must be that it still goes ahead, but time and space would open up for events to take another course.

Which events? A recession, which the postwar economic cycle says Britain is due in the coming years. A sustained drop in net immigration from Europe, which is already afoot. A parliamentary vote on the terms of exit. And more compromises from a government that has already given way on the European Court of Justice, the financial settlement and the very desirability of a phased exit. The trend of these concessions, all made without domestic political cost, is telling. There will always be a reason to give more, to opt back into this or that, to postpone another year. The accretion of small compromises over time is Johnson’s great dread.

Notice that, on the question of life after the EU, he has nothing to say. When a grown man with a formidable education writes that “it is going to be great and we need to believe in ourselves and believe we can do it”, he is clean out of ideas. But on the tactics of achieving exit, he is all substance, right down to his four red lines that curb the depth and span of any transition.

He has no “positive” account of exit because there is none to be had. The EU does not hold member states back from external trade, unless Germany is a mirage, or from munificent healthcare spending, unless France is a hologram. No, what Johnson has is a political hunch that exit has to happen at pace or not at all.

He knows that, while no prime minister will dare to explicitly rescind the referendum, Britain could ease into a Wodehousian comedy of manners in which we all agree not to talk about this Brexit business, as one year of transition becomes two years becomes more.

“Pass the salt, dear”, a nervous country might say, every time partisans on either side press for a final decision to stay or go.

Johnson is more honest on this point than moderate Leavers, among whom the idea of transition has become thoughtless common sense. Politics is so changeable, and two years such a long time, that anyone who favours a transition period is all but announcing their willingness to revisit the principle of exit itself at the end of that period.

The longer Britain tarries in a state of semi-membership, the more this becomes a workable modus vivendi for the indefinite future, or even a route back into the EU, as the electorate morphs in composition.

Leave soon at the risk of economic chaos or leave late at the risk of never leaving. It is the Eurosceptic dilemma and Johnson has made a respectable choice, albeit with other people’s money. Whether Britain goes or half-stays, its probable fate is decline. It will have inferior terms of access to its largest market than it enjoys now. At home, none of its governing options are attractive. A country that cannot face down enough nimbys to expand Heathrow airport cannot carry enough voters to close its fiscal deficit.

But even, or especially, for nations on a downward gradient, marginal gains matter. It is better to be half-in than all-out of the EU.

Johnson can see transition for what it is: the last public service of a woman desperate to salvage something for the country from her failed premiership, and her masochist’s suffering.