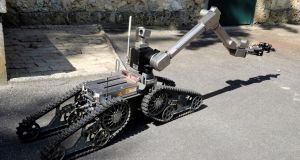 The United Nations is to open a new office in the Netherlands to monitor leading-edge trends in the development of robotics and artificial intelligence (AI) – some elements of which were described last month as posing “the biggest existential threat” facing humanity.

The UN currently has a number of departments involved in research on the impact of AI and robotics on different aspects of the global economy, and the aim now is to focus that expertise in a single agency in The Hague, providing an integrated overview which monitors risks as well as advantages.

“We’re at a crossroads and it’s difficult to overstate the impact this technology is going to have on our lives,” says Irakli Beridze, senior strategy adviser at the UN Interregional Crime and Justice Research Institute (UNICRI), which will have responsibility for the new unit.

“It’s just starting to make itself felt. Police are looking at how criminals and terrorists are likely to use artificial intelligence, for example. And governments and economists are wondering if we’re entering an era of mass unemployment due to rapid advances in robotics.”

One area of research in which a UN expert group is already involved is the study of the potential impact of autonomous military robots – everything from drones to driverless tanks and automated machine guns – on otherwise conventional battlefields across the world.

Experts are predicting that the widespread deployment of this technology will be possible in years rather than in decades – and that it will herald a “third revolution” in warfare technology, after the epochal changes prompted first by gunpowder and later by nuclear weapons.

But while automation should ideally make conflict safer for military personnel, there are also concerns that it could lower the threshold of acceptability for engaging in bloodshed and lead to substantially greater loss of civilian life in often-inaccessible war zones.

It was on this basis that 116 experts from 26 countries – led by inventors Elon Musk of Tesla and Mustafa Suleyman, head of Applied AI at Google DeepMind – called on the UN to ban autonomous weapons because they were “morally wrong” and would almost inevitably “industrialise” warfare.

There’s also uncertainty about the impact of robotics and AI on the world of work, with some experts predicting large-scale redundancies – and others taking the view that the changing economy will generate new job categories capable of picking up the slack.

However, the International Bar Association (IBA) has warned that one result will be the emergence of a gap between current employment legislation and the laws necessary to reflect the new reality of automated or semi-automated workplaces.

“Technological change is nothing new, but in the past it’s been much more gradual,” says Gerlind Wisskirchen of the IBA’s Global Employment Institute. “This is about the speed with which this latest revolution is occurring: it is on an exponential curve.

“At all levels in society, jobs currently being done by humans are at risk of being reassigned to robots or AI – and the legislation once designed to protect the rights of those human workers may no longer be fit for purpose.”

The aim, says Prof Noel Sharkey, co-founder of the Foundation for Responsible Robotics, must be to balance innovation and accountability.

“On the one hand, any new legislation must be nuanced so that it doesn’t stifle innovation. On the other, it’s important to place the responsibility for this technology squarely on the humans behind the robots - and to ensure their accountability.”

For Beridze, the priority is social stability. “The change will be substantial. The speed is unprecedented. That can lead to instability if society doesn’t adapt quickly enough.”