Sydney men failed to smuggle device through check-in as it was too heavy, police say 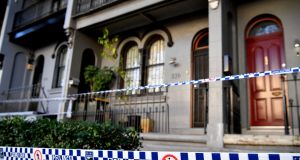 Police continue to search a home in Surry Hills, Sydney, Australia. Two men appeared in court on Friday in relation to an alleged terror plot to bring down an aircraft. Photograph: Joel Carrett/EPA

Two men were charged with terrorist offences in Sydney on Friday over an alleged plot to smuggle a bomb on to an Etihad Airways flight, which authorities say was organised with help from Islamic State.

Khaled Khayat (49) and Mahmoud Khayat (32), who live in Sydney, allegedly attempted to smuggle an improvised explosive device on to a flight on July 15th but were unable to get the luggage through check-in because it was too heavy.

When their original plan failed, the men dismantled the bomb – which had been hidden in a meat grinder – and attempted to build a device that could disperse dangerous chemicals, police allege.

“This is one of the most sophisticated plots that has ever been attempted on Australian soil,” said Michael Phelan, Australian Federal Police deputy commissioner. “We could very well have had a catastrophic event.”

Mr Phelan said the device was made with high-grade military explosive that had been illegally imported into Australia on a cargo flight from Turkey. He alleged that one of the Australian plotters was being directed by Isis in Syria.

“This advice was coming from a senior member of Islamic State,” he said.

Intelligence agencies became aware of the bomb plot on July 26th, 11 days after the failed attempt to smuggle the bomb onboard the flight from Sydney airport. They conducted raids at several address across the city on Saturday, which led to the arrests of four men.

Australian media have reported police received a tip-off from a foreign intelligence agency. Etihad said its security team was assisting Australian police with their investigation.

Two of the men charged with terrorist-related offences appeared in court on Friday and were refused bail. A third man was released, while a fourth remains in detention and is being held under counter-terrorism laws.

The federal police said they were confident they had extinguished the threat posed by the terror cell and stressed that existing security arrangements at Australian airports were appropriate.

Mr Phelan said the explosive device did not get past check-in and he was confident the bomb would have been detected by airport security.

Police in Australia say they have foiled more than a dozen terrorist attacks in recent years, including a planned Christmas Day attack in Melbourne in 2016 and a plot to kill police officers last year on Anzac Day, the April 25th public holiday to commemorate those in Australia and New Zealand who fought and died for their country.

More than 100 people have left Australia in recent years to fight in Syria alongside terrorist organisations, including Isis, according to authorities.