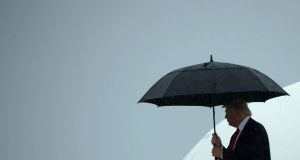 US president Donald Trump uses an umbrella after stepping out of Air Force One in Maryland. Photograph: Chip Somodevilla/Getty Images

Donald Trump was promising to destroy a vile criminal cartel. Unfortunately, not his own. But one could be forgiven for mistaking the vicious tactics of the MS-13 gang, as described by the president in a Long Island speech on Friday, with those of the Trump White House.

“They don’t like shooting people because it’s too quick, it’s too fast,” Trump said, adding: “They like to knife them and cut them, and let them die slowly, because that way it’s more painful, and they enjoy watching that much more. These are animals.”

The president could have been describing his own sadistic assault on Jeff Sessions, “as flies to wanton boys”, as Shakespeare said. Trump turned Sessions — with all his backward views on gays, drugs and criminal justice — into an unlikely hero for politicians from both parties, who began hailing him as a crown jewel of American jurisprudence.

Trump is not a mere Republican; he’s the head of his own 'beautiful', us-against-them movement

In his speech, Trump encouraged police brutality and said he was “the big, big believer and admirer of the people in law enforcement, OK?” He said that he’s protecting the backs of law enforcement “100 per cent”. Except for Sessions, Sally Yates, Preet Bharara and Robert Mueller.

As two people close to Trump told The New York Times’s Maggie Haberman when asked why he was tormenting Sessions instead of firing him: Because he can.

Six months in, Trump has pushed out a staggering number of top people, culminating with Reince Priebus. And in his paranoid, aggrieved isolation, he’s even thinking about nixing Steve Bannon, nemesis of the Mooch, and mulling firing the one who could get him fired, Mueller, and pardoning himself for possible charges.

Trump learned his technique of publicly criticising and freely firing from George Steinbrenner, one of the ruthless, towering characters he modelled himself on when he started hanging out at Yankee Stadium in the ’70s.

The dark pandemonium of the Trump West Wing has become a wormy scene worthy of Hieronymus Bosch. As Trump’s Fox News cheerleader Katrina Pierson likes to say: “People have to get comfortable being uncomfortable.”

Trump unleashed his Mini-Me pit bull Anthony Scaramucci to maul Priebus, and The Mooch cast himself as Cain to Priebus’s Abel, eviscerating him in a lewd rant to, of all places, The New Yorker. Then Trump delivered the coup de graceless Friday evening, tweeting from Air Force One as Priebus deplaned that he was replacing the chief of staff with homeland security secretary John Kelly.

Trump had always resented Priebus for advising him to get out of the election race after the Billy Bush “Access Hollywood” tape story broke — known as Priebus’s “scarlet AH”, according to The Washington Post — and for not understanding that Trump is not a mere Republican; he’s the head of his own “beautiful”, us-against-them movement, “the likes of which the world has never seen”.

Priebus wasn’t “an original”, as early Trump loyalists are known, or a populist. But he was Paul Ryan’s Wisconsin BFF, which made Trump doubt where his chief of staff’s loyalties lay when it came to Congress. And Trump and the Mooch had fingered Priebus as a leaker, which bugs them, even though they themselves are leakers extraordinaire.

As The Post reports, Trump’s delighted demeaning of Priebus included this incident: “At one point, during a meeting in the Oval Office, a fly began buzzing overhead, distracting the president. As the fly continued to circle, Trump summoned his chief of staff and tasked him with killing the insect.”

After torturing Reince for months, Trump happily gave him the final humiliating shove. As the tweets hit the White House cellphones, Priebus’s colleagues Stephen Miller and Dan Scavino jumped out of the Suburban they were sharing with Priebus, leaving the jobless man in a driving rain on the tarmac at Andrews Air Force Base, the weakest link tossed off the sled for the press wolves.

You’re a killer and a king or a loser, as Fred Trump liked to say. And anyone who doesn’t understand that Trump is more important than the GOP or the institution of the presidency is, in his mind, a loser. Anyone who doesn’t get that the loyalty should be for him personally, rather than the country, is, to Trump, a loser.

Congressional Republicans are losing their fear of Trump, making ever more snarky comments about him

Trump is trapped in a caricature of masculinity that corrodes his judgment. As red meat for his base, he tweeted that, after consulting his generals, he was banning transgender people from the military. But his defence secretary, James Mattis, and generals quickly pushed back on the idea.

But after all his bragging about being a great negotiator and closer, it is president Trump who can’t get it done. He couldn’t even close the deal on a pathetic, bare-bones healthcare Bill, ineffectually bullying Lisa Murkowski, a Republican senator from Alaska, and failing to win over John McCain, who gleefully had his revenge for Trump’s mockery of him as being a loser because he was captured in war.

Trump can’t get it done for his pal Putin either. In fact, the biggest legislative accomplishment before Congress leaves for August will have been passing new sanctions on Russia because politicians don’t trust their own president. Talk about weak.

Congressional Republicans are losing their fear of Trump, making ever more snarky comments about him. North Korea is shooting off missiles and the White House is flustered. The generals are resisting Trump’s tweet edicts. The mortified leader of the Boy Scouts had to apologise for the president’s suggestive and partisan speech.

And what could be weaker than that?