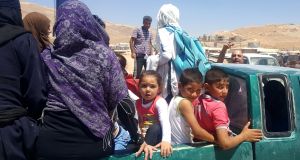 Syrian refugees arrive in Wadi Hamayyed, on the outskirts of Lebanon’s northeastern border town of Arsal, to board buses bound for the northwestern Syrian town of Idlib on Wednesday, August 2nd. Photograph: Stringer/AFP/Getty

A ceasefire and evacuation agreement between Hizbullah of the Lebanon and al-Qaeda’s Jabhat Fatah al-Sham got under way on Wednesday when more than 150 buses transported 7,777 Syrians from northeastern Lebanon to northwestern Syria.

The Lebanese military said 1,216 fighters with their side arms, their families, and refugees were accommodated in two convoys. Fighters from Jabhat Fatah al-Sham (formerly al-Nusra) torched their positions before departing, indicating they would not be back.

The operation stalled on Tuesday after Jabhat made fresh demands on prisoner releases and exchanges. Once these were resolved, the convoys, monitored by the Red Crescent and Red Cross, left the Lebanese mountain town of Arsal for the Jabhat-controlled Idlib province.

UN refugee agency (UNHCR) spokeswoman Lisa Abu Khaled argued the repatriation of refugees might not be voluntary. She said the agency believed “conditions for refugees to return in safety and dignity are not yet in place in Syria”. Fearing war, hardship and jihadi persecution, the majority of refugees in Arsal do not want to be transported to Idlib.

The agreement, brokered by Lebanese security chief Maj Gen Abbas Ibrahim, provides for a cessation of hostilities in the Arsal region and the transfer of the Syrians to Idlib, a dumping ground for jihadis driven from Syria’s cities, towns and villages by pro-government forces.

This deal is modelled on the Syrian government’s policy of “reconciliation”, which grants amnesty to insurgents who give up their arms and provides buses for Idlib for those who choose to carry on fighting. The Hizbullah-Jabhat accord is the first cross-border transfer and could be repeated once jihadis are routed from other locations in Lebanon.

The truce, proclaimed a week ago by Hizbullah, ended a six-day campaign to drive the Jabhat from the mountainous border region where the jihadis had established bases after they entered the Syrian conflict in 2012. Hizbullah’s military wing launched a pincer operation against the jihadis from both Lebanese and Syrian territory, while the Lebanese army provided logistics and protection for Arsal town.

Hizbullah depended on the support of Syrian ground troops and aircraft on the Syrian side of the border.

As action against jihadis is highly sensitive in deeply divided Lebanon, the Lebanese army did not take part in the fighting. Troops surrounded the bleak battleground and detained jihadis who attempted to escape. The army has, however, the approval of Lebanon’s dysfunctional government and its western and Gulf allies to deploy for the coming offensive near Arsal against Islamic State, branded by all a “terrorist” group.

Hizbullah has argued that efforts to topple the Syrian government destabilise Lebanon and has fought on Damascus’s side since 2012. While waging the Arsal offensive, Hizbullah enjoyed support from Lebanon’s Christian-Shia alliance, President Michel Aoun, Druze leader Walid Jumblatt and army chief Joseph Aoun. Hizbullah’s involvement in the Syrian conflict is backed by Damascus, Baghdad, Tehran, Moscow, Beijing and Cairo.

Hizbullah’s role has, however, been sharply criticised by the Christian-Sunni coalition and western and Gulf powers ranged against Damascus in Syria’s proxy wars. The coalition has called for Hizbullah’s disarmament while prime minister Saad Hariri’s Future movement, the coalition’s Sunni component, has supported Syrian insurgents and opposed efforts to oust the Jabhat from Arsal.

The Jabhat and other anti-Damascus elements were initially welcomed in Arsal, a conservative Sunni area which has gradually turned against both the jihadis and the 45,000 Syrian refugees living in camps near the town.