Ed Crawford front-runner to be next US ambassador to Ireland 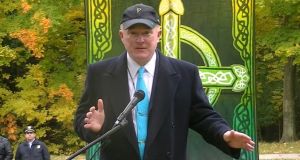 Ohio businessman Ed Crawford, who has emerged as the front-runner to become the next US ambassador to Ireland, at the opening of an Irish Cultural Garden in Cleveland. Image: YouTube.

Ohio businessman Ed Crawford has emerged as the front-runner to become the next US ambassador to Ireland.

A long-time Republican party donor, Mr Crawford is the chairman of Park-Ohio Holdings, a Nasdaq-listed manufacturing and supply-chain company which has operations across the world, including in Cork.

He was the finance chairman for the Republican National Committee’s Ohio campaign during last year’s presidential race, and was an early supporter of Donald Trump.

Mr Crawford, whose grandparents came from Co Cork, has also been centrally involved in the Irish community in Cleveland, hosting the then taoiseach Enda Kenny at an event to mark the rededication of the Irish Cultural Garden in the city in 2012.

His emergence as the top candidate to become the next US ambassador comes after Brian Burns, a Florida businessman and friend of Mr Trump, withdrew from consideration for the post.

During the election campaign, Mr Crawford said of Mr Trump: “We need a positive leader. We need someone that’s going to help us make the changes necessary to put us back on track so that everyone has a chance.”

The position of US ambassador to Ireland has been vacant since the departure of Kevin O’Malley, Barack Obama’s nominee, in January. The role is being filled in the interim by US embassy chargé d’affaires Reece Smyth.

Once nominated by the US president, ambassadorial nominees must be approved by the senate.

Since Mr Trump’s election there have been 27 ambassadorial appointments, though dozens of posts around the world are still unfilled.

Most of the confirmed nominees have been drawn from the world of business, though some have links to the sporting industry. The owner of the American football team the New York Jets, Woody Johnson, has been nominated as ambassador to Britain, while Jamie McCourt, the co-owner of the Los Angeles Dodgers baseball team, is due to become the next US ambassador to Belgium. Like Mr Johnson, she was a Trump supporter and donor to the presidential campaign.

Park-Ohio, the company Mr Crawford chairs, had revenue of $1.3 billion last year and employed about 6,000 people around the world. It owns and operates manufacturing and industrial businesses in 20 countries. In 2013 it acquired Cork-based supply chain business QEF Global limited.

Mr Crawford has previously spoken of the importance of his Irish identity to his life and career. Though born on the east coast of the United States, Mr Crawford moved with his family to Cleveland as a boy and is a well-known business figure in the midwest area.

Mr Trump said following his election that he intended to appoint Mr Burns as the next ambassador to Ireland. While Mr Burns was never officially nominated, he withdrew from consideration for the position over health concerns.

Mr Burns lives in Palm Beach, Florida and is a member of the US president’s Mar-a-Lago private club. His father was a senior adviser to Joe Kennedy, father of president John F Kennedy, and he has been a major contributor to Irish philanthropic causes.