President’s new chief of staff is using his forceful, volatile style to bring order to chaos 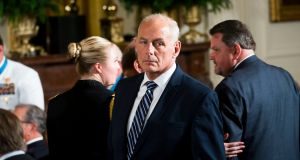 The new White House chief of staff General John Kelly: often described the White House as one of the most dysfunctional organisations he had ever seen. Photograph: Doug Mills/The New York Times

In his six months as homeland security secretary, John Kelly often described the White House as one of the most dysfunctional organisations he had ever seen, complained to colleagues and allies about its meddling, incompetence and recklessness, and was once so angry he briefly considered quitting.

Now as President Donald Trump’s chief of staff, he is doing something about it – with a suddenness and force that have upended the West Wing.

Kelly cuts off rambling advisers mid-sentence. He listens in on conversations between cabinet secretaries and the president. He has booted lingering staff members out of high-level meetings, and ordered the doors of the Oval Office closed to discourage strays. He fired Anthony Scaramucci, the bombastic New Yorker who was briefly the communications director, and has demanded that even Trump’s family, including his daughter Ivanka Trump and son-in-law, Jared Kushner, check with him if they want face time with the president.

On Wednesday, his third day on the job, he delivered a message about respecting chains of command, backing the decision of Lt Gen HR McMaster, the national security adviser, to dismiss Ezra Cohen-Watnick, a Kushner ally and staff member on the National Security Council. It was a move Kushner and Stephen Bannon, the president’s chief strategist, had long opposed, according to two administration officials.

Whether Kelly, a retired Marine general will succeed in imposing military discipline on the faction-ridden White House remains in doubt; Trump has never been known to follow anybody’s direction, in Trump Tower or the White House. But Trump has never encountered anyone quite like Kelly, a combat veteran whose forceful management style and volatile temper are a match for the president’s.

“He’d basically look at me and say, ‘I think that proposal is four-letter-word nuts,’” said Leon Panetta, who as defence secretary made Kelly his chief military aide. “John is the kind of guy who will look you in the eye and tell you what the hell he is thinking. The real question is whether the president will give him the authority he needs to do the job.”

People close to Kelly said he resisted weeks of entreaties by the president, beginning in May, before finally agreeing to replace Reince Priebus out of a sense of soldierly duty. That he understands the sobering realities of his new deployment could be seen in his unsmiling mien while sitting next to Trump for a photo opportunity this week.

Among Kelly’s immediate challenges: brokering peace between warring factions in the West Wing; plugging leaks about internal activities; establishing a disciplined policymaking process; and walling off the Russia investigations.

Kelly (67) has told his new employees that he was hired to manage the staff, not the president. He will not try to change Trump’s Twitter or TV-watching habits. But he has also said he wants to closely monitor the information the president consumes, quickly counter dubious news stories with verified facts, and limit the posse of people urging Trump to tweet something they feel passionately about.

He has privately acknowledged that he cannot control the president and that his authority would be undermined if he tried and failed. Instead, he is intent on cosseting Trump with bureaucratic competence and forcing staff members to keep to their lanes, a challenge in an administration defined by tribal loyalties to power players like Kushner and Bannon.

“Several times I’ve been on phone conversations with the president over the last couple of days and Gen Kelly has been on those conversations as well,” Mick Mulvaney, director of the Office of Management and Budget, told reporters on Thursday when asked if Kelly was making a mark.

The Trump White House is a judge-a-book-by-its-cover workplace, and staff members have been struck by Kelly’s bearing: tall, stern and commanding a respect Priebus never did. People close to Kelly said they expected him to methodically assess his new staff before making more drastic changes – and he has told people that he wants to improve morale before attacking the organisational chart.

Kelly has not been shy about letting Trump’s staff members know when they screwed up, ripping into West Wing aides during the chaos surrounding Trump’s original travel ban when he was at the department of homeland security. While he supported the broad policy goals, he was furious that he and his sprawling agency’s staff were caught off guard by a directive that was conceived and carried out by inexperienced aides in the White House, according to several long-time Trump advisers.

People close to Kelly said he also bristled repeatedly at efforts by Bannon and Stephen Miller, the president’s senior adviser, to install people they liked in his department. Kelly eventually won pitched battles over who would become director of customs and border protection and head of the secret service, officials said. But Bannon has had a long-standing alliance with Kelly, supporting many of his other appointments.

In May, Kelly considered resigning after Trump’s firing of James Comey, the FBI director, telling Comey in a phone call that he was thinking about doing so to protest at the president’s actions, according to a former law enforcement official familiar with the conversation.

A senior White House official briefed on the exchange by Kelly said he never threatened to quit, but confirmed that he called Comey. Days later, Kelly objected strenuously to the decision by Thomas Bossert, Trump’s homeland security adviser in the White House, to take control of the response to a global cyberattack – a role traditionally played by Kelly and his department’s cybersecurity division.

On Capitol Hill, Kelly is viewed with a mix of admiration for his long military service and disappointment that he has been too willing to embrace and defend Trump’s more controversial policies, especially on illegal immigration. In closed-door meetings with House members in March, Democrats questioned Kelly about aggressive immigration sweeps at churches and hospitals. The frustration grew as Kelly disputed that such sweeps were happening, even in the face of enlarged photos showing a homeland security vehicle parked on the grounds of Christ Cathedral in Garden Grove, California.

“He’ll push back hard,” said Republican Lou Correa who presented the photographic evidence to Kelly during the meeting. The next month, Kelly offered a taste of his blunt approach, telling lawmakers they could “shut up” if they did not like the laws his department was charged with enforcing.

“He’s never come to Capitol Hill and blown smoke to senators and congressmen,” said Republican senator Tom Cotton, a former Army officer who is close to Kelly. Dealing with Trump’s family, especially Kushner, will not be so simple. In an interview in May, Kelly came to the defence of the president’s son-in-law, who has an office in the West Wing as a White House adviser, against charges that he had tried to set up an inappropriate communications channel with Russia. He called Kushner “a great guy, a decent guy”.

In discussions with Trump about moving to the White House, Kelly also insisted that Kushner and Ivanka Trump, who is also a White House adviser, report to him. They both agreed, in part because they wanted to see Priebus ejected as quickly as possible, and in part because they recognised Donald Trump’s presidency needed to be professionalised.

A lingering personnel question gave Kelly a chance to assert his position at the top of the West Wing. Aides said the ousting of Cohen-Watnick was intended as a show of confidence from Kelly to McMaster. Kushner did not object to the decision, and had conceded that McMaster was going to fire his friend three weeks ago, according to a person close to the Trump family.

Robert Gates, the former defence secretary, who has known Kelly for two decades, said the fact that the president agreed to have family members report to the new chief of staff was “a really important first step”. “The question is, does it last?” he added. “But it sends a powerful signal to the rest of the people in the White House.”

Gates, who was also Kelly’s boss as defence secretary, recalled the times he sat with Kelly at the Pentagon across a small conference table once used by Jefferson Davis when he was secretary of war. Gates would tell Kelly what he was planning to do and Kelly would say, “You could do it that way.”

What that really meant, Gates said, was “that’s the stupidest idea I’ve ever heard in my entire life.” Kelly would then offer another – often better – option, Gates said.

Panetta, who served as President Bill Clinton’s chief of staff before he went to the Pentagon, said he urged Kelly to buy a “big bottle of scotch” when he agreed to take the job. A White House spokeswoman did not know if he had gotten around to buying one yet, but said the new chief of staff preferred Irish whiskey.