‘Refugees get global attention. People displaced by other factors don’t’ 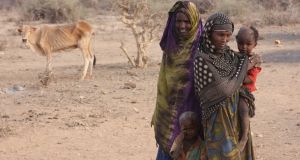 Women and children at an IDP settlement 60km south of the town of Gode, reachable only along a dirt track through the desiccated landscape. Photograph: James Jeffrey

Fourteen kilometres outside the Ethiopian town of Gode, a group of women with bands of dusty children clutching their dresses point to a patch of ground on the outskirts of their makeshift settlement, where their prized black-headed sheep lie dead.

The women remain friendly despite their predicament. But a male pastoralist arrives and his temper starts to fray. “If you aren’t going to do anything for us then go away!” he tells a government official.

In Ethiopia’s southeastern Somali region there are 264 sites containing nearly 600,000 internally-displaced persons (IDPs), according to a survey conducted by the International Organisation for Migration between May and June 2017.

The region contains the largest proportion of the total of just over a million IDPs identified by the organisation throughout Ethiopia. Many sites have reported having no access to food and international assistance is sorely needed to help the Ethiopian government to cope.

But international aid is often geared toward those who crossed international borders. Hence the incongruity of many of the region’s struggling inhabitants receiving less assistance than refugees who entered the region from neighbouring Somalia.

“Refugees get global attention – the issue has been around a long time, and it’s just how people look at it, especially if conflict is involved,” says Hamidu Jalleh, working for the United Nations Office for the Co-ordination of Humanitarian Affairs in the Somali region, in Gode. People displaced by climatic or weather conditions don’t get the same attention, he points out.

IDPs are only one part of the humanitarian challenge for those tackling the drought in Ethiopia’s Somali region, in which the inhabitants are ethnically Somali but Ethiopian nationals: 2.5 million people will require food assistance in the second half of this year, according to aid agencies, while some report this number is expected to be revised upwards of 3.3 million by the middle of this month.

On top of this, the international humanitarian aid network is straining due to successive protracted global crises in countries such as Yemen, Somalia, Sudan and Nigeria. The UN says the world is facing one of the biggest humanitarian disasters since the second World War, endangering 20 million lives.

“Due to a shortage of funding, we were only able to reach one million out of 1.7 million in the Somali region in June and July,” says Peter Smerdon, United Nations World Food Programme regional spokesman for East Africa.

Drought does not recognise borders but international law divides people into refugees and IDPs. Under the 1951 Refugee Convention, crossing a border entitles refugees to international protection, whereas IDPs remain the responsibility of national governments.

The effects of this can be seen on the outskirts of the town of Dolo Odo at Ethiopia’s southern extremity beside Somalia, about 250km southwest of Gode.

Lines of corrugated iron roofs glint in the sun throughout a refugee camp housing 40,000 Somalis, where refugees complain of headaches and itchy skin in temperatures of 38-42 degrees, and about a recent reduction in their monthly allowance of cereals and grains from 16kg to 13.5kg.

But at least that ration is guaranteed, along with water, health and education services – none of which are available to IDPs in a nearby settlement.

IDPs remain a sensitive topic, their existence suggesting internal conflict or disorder. Hence they can fall through the gaps, especially in Ethiopia. “It’s only in the last year and a half we’ve been able to start talking about IDPs,” says the director of a humanitarian agency working in Ethiopia, who spoke on condition of anonymity. “But the government is becoming more open about the reality.”

Many within the aid industry praise Ethiopia’s open-door refugee strategy – in marked contrast to western countries’ increasing focus on migrant reduction. But questions remain about its handling of IDPs.

“This country receives billions of dollars in aid, but there is a huge disparity between aid to refugees and IDPs,” says the director. “How is that possible?”

The Somali region’s economy depends on livestock and related exports. But as a result of this drought, pastoralists in southern Ethiopia have lost in excess of $200 million (€168 million) worth of cattle, sheep, goats, camels and equines.

Belated seasonal rains in early April quickly petered out across the Somali region – as did hope of their providing relief. As a result, livestock losses could easily double, as pasture won’t regenerate to the required level to support livestock through to the short autumn rains.

In 2016 the Ethiopian government spent $700 million (€588), while the international community made up the rest of the $1.8 billion (€1.5 billion) needed, to assist more than 10 million Ethiopians effected by an El Niño-induced drought.

“Last year we dodged a bullet, but now the funding gaps are larger on both sides,” says Edward Brown, World Vision’s Ethiopia national director. “Large donors are making hard choices as they are having to do more with less.”

Currently, the Ethiopian government and humanitarian partners have raised $553 million (€464 million) of the $948 million needed to help 7.8 million drought-affected Ethiopians identified around the country.

Aid agencies tackling Ethiopia’s drought previously warned they would run out of funds by this July. It appears that calamity has been avoided, for now, with Ethiopian authorities reporting that last-minute donations from the UK, European Union and United States means they have enough money until October to keep up food shipments.

But another increasingly pressing issue remains: how to build capacity for a viable future in this sun-scorched part of the world.