Arrests made in London as Rashan Charles protest turns violent 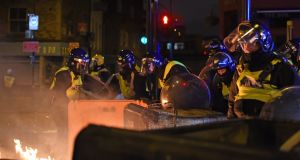 Riot police at a protest in Kingsland Road in east London, where people gathered in response to the death of Rashan Charles. Photograph: Lauren Hurley/PA Wire 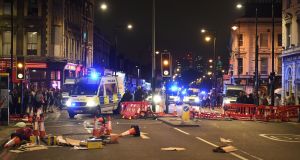 Riot police at a protest in Kingsland Road in east London, where people gathered in response to the death of Rashan Charles. Photograph: Lauren Hurley/PA Wire

Protesters angry at police over the death of Rashan Charles, a young black man who died after being chased into an east Londonshop by officers, blocked a road and threw debris at the police on Friday evening.

Dozens of people gathered outside the convenience store in Dalston, where Charles was pinned to the floor by police officers who had been chasing him in the early hours of Saturday morning. The 20-year-old was taken to Royal London hospital, where he died a short time later.

The protesters pushed mattresses, wheelie bins, traffic cones and rubbish into the street, stopping cars from passing. Several vans of riot police sent to control the demonstration came under attack, with the protesters hurling bottles and other missiles at officers.

When a lorry drove through the barricade, hitting the wheelie bins lined up in its path, protesters jumped on board, clinging to the window, while one sat on a bin which was pushed along by the vehicle. A man clambered on to the roof but the lorry continued to drive with people throwing bottles at it.

Several wheelie bins were set alight at the barricade and a mattress thrown on top of the burning pile sent black smoke spiralling into the air. Fireworks were launched towards the police as a helicopter could be heard circling above.

Officers on horses and others in riot vans were deployed as the police tried to contain the disorder and break up groups of protesters.

Windows were smashed in several Kingsland Road shops, and some restaurants in the area pulled down their metal shutters, trapping customers inside, as the protest became more violent.

Videos posted on social media show people confronting a line of police officers armed with batons as they tried to clear debris off the road.

The Metropolitan police said they were aware a protest had been planned and that officers were on the scene.

“At approximately 1540, a number of items were placed on the highway of the A10 Kingsland Road, close to Middleton Road,” a statement said. “A number of items including bottles have been thrown towards officers who continue to monitor the situation.”

The Hackney division of the Met tweeted an image of a damaged police car and said the increasingly violent protest was not what the Charles family wanted.

In a protest on Monday, at least 150 people marched on Stoke Newington police station. Some carried placards which read “Black Lives Matter” and the crowd chanted “No justice, no peace”.

The Independent Police Complaints Commission has launched an investigation into Charles’s death. The Met said Charles was seen “trying to swallow an object” and that an officer “sought to prevent the man from harming himself”.

In an update on Friday, the IPCC said it had collected videos from cameras worn by police officers and CCTV, and had sent one of its commissioners Cindy Butts to Dalston to meet with people concerned about the case.

The Charles family have re-issued a statement first released on Monday, which called for calm. The statement said: “We appreciate all support, but any hostile actions or other events, at this stage, that may risk detracting from our current cooperative engagement with the IPCC and Met police is unwelcome.”