Tensions between India and Pakistan rise after fatal clash in Kashmir 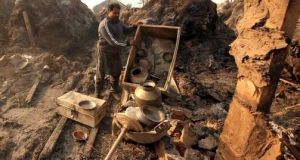 A man sorting through his destroyed home following shelling across the “line of control” in northern Kashmir. Photograph: Getty Images

The fragile peace between nuclear-armed rivals India and Pakistan is under severe strain as their two armies continue to exchange missile, mortar and small arms fire across their disputed border in northern Kashmir state.

These exchanges, the worst between the two in more than a decade, resulted in the death of four Indian soldiers over the weekend along the 776km “line of control” that divides Kashmir between the neighbours.

“The Indian army will respond when the time is right, and it will be a fitting response to Pakistan,” India’s federal home minister Rajnath Singh said in response to the four soldiers’ deaths.

The line of control is the de facto border dividing Kashmir between India and Pakistan, both of whom claim the disputed principality in its entirety.

It is one of the world’s most heavily militarised frontiers, where more than 300,000 Indian and Pakistani soldiers, backed by heavy artillery and missiles, face off against each other.

Artillery duels were a regular feature in this mountainous region until 2003, when both sides agreed to a ceasefire, but the ceasefire began unravelling in 2013 after diplomatic and political ties between the rivals deteriorated.

India claims the Pakistani army violates the ceasefire along the line of control to facilitate the infiltration of armed militants into Kashmir in order to boost the insurgency raging in the state since 1989 for an independent Muslim homeland. The insurgency has claimed more than 70,000 lives.

Pakistan denies this charge, saying it provided Kashmir’s separatists with diplomatic and political support to accomplish “self-determination” in the face of human rights abuses by India’s security forces.

The Indian army claims Pakistan violated the line of control ceasefire 868 times last year, up from 228 instances in 2016, and 152 violations in 2015. India says Pakistani ceasefire violations so far this year have already reached 240.

Dozens of paramilitary personnel manning the border, and civilians living on either side of the line of control, have died in cross-border exchanges. Thousands of locals have fled their villages to escape the fighting, with many forced to live in nearby towns for months.

Each side blames the other for the aggression, but it is virtually impossible to independently verify the conflicting claims as the respective armies control access to the line of control region.