False alerts intended to be test message, appeared to have been sent by AccuWeather 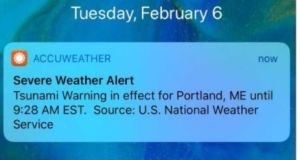 The US national weather service said on Tuesday it was investigating how incorrect alerts were broadcast to mobile phones warning residents of coastal cities from at least New York to New Orleans of possible tsunami waves.

The false alerts, intended to be a test message, appeared to have been sent by the private forecasting company AccuWeather, according to images of the alerts posted on social media by people who said they had received them.

“If you received a tsunami warning from a 3rd party app this morning, it was in error,” the national weather service’s New Orleans office said on its Twitter account. It said the messages appeared to have stemmed from a monthly test of its alert systems.

“The National Weather Service Tsunami Warning this morning was a TEST,” AccuWeather wrote on its Twitter account. Officials with the company did not immediately respond to requests for comment.

The National Weather Service Tsunami Warning this morning was a TEST. No Tsunami warning is in effect for the East Coast of the U.S.

Jeremy DaRos, of Portland, Maine, said the alert made him “jump” because he lives a stone’s throw from the water and was aware of recent spate of small earthquakes that made the alert seem plausible.

He said: “Looking out the window and seeing the ocean puts you in a different frame of mind when you get a tsunami warning.” Mr DaRos said that after clicking on the push notification for details, he realised it was just a test.

The alerts came the month after the state of Hawaii mistakenly warned residents of the islands of an inbound missile, sparking panic. The message was later blamed on an employee’s error.

Earlier this month, residents of the West Coast were warned to brace for possible tsunami after an earthquake off the coast of Alaska. The warnings were later lifted and no significant damage was reported.

The National Weather Service said it was investigating the confusion.–Reuters and PA