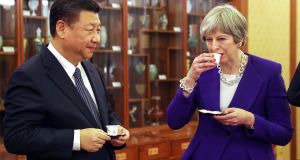 British prime minister Theresa May drinks next to Xi Jinping, China’s president, during a tea ceremony at the Diaoyutai state guesthouse in Beijing on Thursday. Photograph: Dan Kitwood/EPA

Theresa May has held talks with China’s President Xi Jinping in Beijing on her mission to drum up support for a favourable post-Brexit trade deal, with the UK prime minister emphasising the bond between two “outward-looking countries”.

Speaking at a joint news conference with Mr Xi, Ms May once again emphasised the oft-repeated mantra about the “golden era” of Sino-British relations, a closeness she hopes to leverage into a free trade deal to buoy the UK economy after it leaves the EU.

The talks at the Diaoyutai state guesthouse between the two leaders also dealt with regional security issues such as North Korea’s nuclear programme, as well as cultural links.

On regional issues, she said that, as both Britain and China were permanent members of the United Nations Security Council, there were global challenges they both faced.

“I’m very pleased with the people-to-people links we have been able to build on in education and in culture too,” she said. “Also as you say we are both significant players on the world stage of outward looking countries.”

The environment was also on the agenda, with Ms May enlisting the BBC presenter David Attenborough as an environmental ambassador, as she presented Mr Xi with a box set of the nature programme Blue Planet II.

She and her husband Philip also took part in a traditional tea ceremony with Mr Xi and his wife Peng Liyuan.

Ms May is eager to negotiate a free trade agreement with China for when the UK leaves the EU, and she and Chinese premier Li Keqiang agreed on a review on Wednesday, which is a first stage towards a trade deal.

She expects to trade deals valued at £9 billion (€10.25 billion) during her three-day visit. UK exports to China have risen 60 per cent since 2010.

Brexit has dominated the prime minister’s visit and while she is looking beyond next year, she has been forced to address criticism of her handling of Brexit and of her leadership, with rivals in the Conservative ranks looking for her job.

While she was flying to China, an impact report was leaked which forecast that Brexit would harm the UK economy regardless of whether it struck a comprehensive free trade deal with the EU, was given single market access or struck no deal at all.

Ms May also raised the prospect of a row with Brussels after warning that EU nationals arriving in the UK after Brexit next year may lose full residence rights during an expected two-year transition period.

The EU has previously insisted that its citizens should be allowed to secure full residence rights for the transition period, but Ms May said EU nationals coming to Britain after March next year would be treated differently.

“I’m clear there’s a difference between those people who came prior to us leaving and those who will come when they know the UK is no longer a member of the EU,” she said.

International trade secretary Liam Fox, who is travelling with Ms May, urged rebels in the party to rally behind her and said she was being very well received by Chinese leaders.