Wikileaks founder, who remains in Ecuador embassy, loses bid to have warrant withdrawn 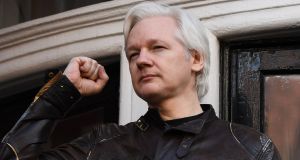 Wikileaks founder Julian Assange addressing the media on the balcony of the embassy of Ecuador in London in May 2017. Photograph: Justin Tallis/AFP/Getty Images

Julian Assange will continue to face arrest if he leaves the Ecuadorian embassy after a judge ruled that the arrest warrant against the WikiLeaks founder was still valid.

Mr Assange (46), skipped bail to enter the embassy in 2012 to avoid extradition to Sweden over allegations of sexual assault and rape, which he denies. Though Swedish prosecutors dropped the investigation against him, he faces arrest if he leaves the building in Knightsbridge, London, for breaching his former bail conditions in the UK.

Last month Mark Summers QC, representing Mr Assange, told the senior district judge, Emma Arbuthnot, that since the Swedish case had been dropped the warrant had “lost its purpose and its function”. He said because Swedish extradition proceedings against Mr Assange had come to an end, so had the life of the arrest warrant.

The defence papers stated: “He [Assange] has spent 5½ years in conditions which, on any view, are akin to imprisonment, without access to adequate medical care or sunlight, in circumstances where his physical and psychological health have deteriorated and are in serious peril.”

But Aaron Watkins, representing the Crown Prosecution Service, said Mr Assange’s argument for having the warrant dropped was “strange and untenable”.

“Assange had been released on bail in proceedings; he was under a duty to surrender to the custody of the court and he failed to surrender at the appointed time for him to do so. Therefore a warrant stands,” Mr Watkins said.

Mr Assange remains concerned that he faces a secret US indictment on charges related to WikiLeaks’s disclosure of leaked classified US documents.

WikiLeaks said on Tuesday that Mr Assange could face life in prison in the US for a variety of charges including espionage, conspiracy and theft.

The group says US grand jury proceedings against Mr Assange began as early as 2010, but it is not publicly known if he faces a US indictment because of the strict secrecy rules governing US grand jury actions.

Several prominent US officials have expressed an interest in prosecuting Mr Assange, and there has been a US investigation into WikiLeaks’s activities.

British officials would be expected to take Mr Assange into custody if there was a US indictment and extradition request.

Ecuador recently granted him citizenship and asylum in an attempt to resolve the political impasse over his continued presence in the UK.

It had tried unsuccessfully to persuade British officials to give Mr Assange diplomatic status, which might have made it possible for him to leave Britain even if he was sought by US officials. – Guardian