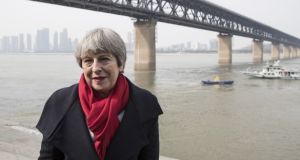 British prime minister Theresa May’s Brexit advisers are secretly considering whether Britain could strike a customs union deal covering trade in goods with the EU, a move that would severely limit the UK’s ability to strike out on its own.

Senior British officials argue that such a step would limit a loss of trade with Europe after Brexit, help address concerns about the Irish border and reduce the need for complex new customs procedures.

The Financial Times has been told by three UK officials that the discussions are “live” in Whitehall.

One official close to Mrs May confirmed the plan - which would take effect after a transition period of about two years following Brexit in March 2019 - was one option being considered.

“If we can find a way of keeping goods in the customs union and retaining some independence on trade - particularly on services - we should look at it,” the official said.

Philip Hammond, chancellor of the exchequer, and Greg Clark, business secretary, are among British ministers favouring a close customs relationship after Brexit.

Liam Fox, UK trade secretary and a leading Brexiter, said on a three-day mission to China that “self evidently” Britain could strike business deals with other countries while in the customs union.

But he argued that the country would have much more to gain if it were free to strike third-country trade deals - while cautioning such agreements may be “some time away”.

Downing Street insisted on Thursday evening it was not considering the customs union plan, which would be deeply controversial with Brexiters in the ruling Conservative party.

It would represent a significant climbdown for Mrs May, who has always said the UK would leave the EU customs union - a type of agreement that refers only to goods.

If it had a customs union with the EU, Britain would still seek to strike trade deals with non-EU countries, particularly since it would no longer benefit from the bloc’s agreements with other nations.

But London’s bargaining power could be limited, since countries with EU deals would already have access to the UK goods markets via the customs union.

Britain could still strike its own trade deals on services, which make up about 80 per cent of the economy, but services-only deals are a relative novelty that would represent a new departure for the global economy.

The customs union proposal is backed by the CBI employers federation, but a UK government spokesman said: “We want to see the most frictionless arrangement as possible but also we need to have the freedom to sign trade deals across the world.”

Under the customs union plan, Britain would retain the EU’s common external tariff on goods with the aim of minimising bureaucracy at the border.

The move would help reduce the need for border inspections and paperwork, but not eliminate it because the EU27 would still need to check that goods flowing from the UK to the bloc met regulatory standards for sensitive products unless the UK also signed up to common regulations under single market rules.

A customs deal covering just trade in goods could appeal to the rest of the EU because of its strength in the sector. The UK had a surplus of £14bn on trade in services in 2016 but it was outweighed by a deficit of £96bn on trade in goods.

George Osborne, former chancellor, urged Mrs May to remain part of a customs union on Thursday, saying the sums “don’t stack up”.

Earlier this week, leaked government forecasts predicted that the UK could lose between 2 per cent and 8 per cent in growth over 15 years if it leaves the customs union and single market, depending on what model it adopted.

The paper concluded that even a trade deal with the US would only benefit GDP by about 0.2 per cent in the long term. – Copyright The Financial Times Limited 2018

Boris Johnson spends night in hospital being treated for Covid-19 06:54
Donald Trump says virus will peak in US in next few days 06:36
Coronavirus: Boris Johnson in hospital for tests as symptoms persist 21:58
Coronavirus: Bodies of victims in Ecuador stored in containers 20:44
Queen Elizabeth invokes spirit of second World War in speech 20:41