Supreme court stormed in Maldives as state of emergency declared 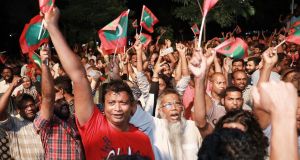 Protesters shout slogans demanding the release of political prisoners during a protest in Male, Maldives, on Friday. Photograph: Mohamed Sharuhaan/AP 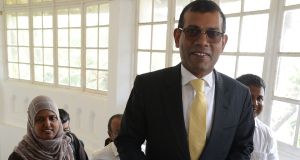 Maldives president Abdulla Yameen on Monday declared a state of emergency for 15 days and security forces stormed the supreme court in an escalation of a power struggle with the archipelago’s top court.

Police also arrested former president Maumoon Abdul Gayoom at his residence along with his son-in-law. Mr Gayoom is Mr Yameen’s half-brother and ruled the country in the Indian Ocean for 30 years until 2008 but is now in the opposition.

His detention is further evidence of a bid by Mr Yameen to strengthen his grip on power.

The president has defied a supreme court ruling ordering jailed opposition leaders to be freed, including Mr Gayoom’s son Farish, an opposition lawmaker.

Mr Yameen has ruled since 2013 but faces mounting pressure at home and from the United States and India to release former president Mohamed Nasheed from a 13-year jail sentence and free eight other opponents from prison.

“The President has been compelled to declare a state of emergency due to the risk currently posed to national security,” said a statement from the president’s office. “Implementation of the Supreme Court ruling is – in its current form – incompatible with maintenance of public safety.”

China, the United States and India issued travel advisories for the Maldives, a country of 400,000 people best known as a beach paradise for tourists.

The tumult comes during the peak tourism season. Tourism brought in $2.7 billion of revenue for the Maldives in 2016.

“I just spoke to the chief justice and he told me that the gates of the supreme court is being stormed by the military. He is inside and nobody can go out or come in,” Husnu Al Suood, the president of Maldives Bar Association and a former attorney general, told Reuters late on Monday.

“The emergency means the supreme court activities are suspended and nobody is in charge of judiciary,” he said.

Shortly after, the spokesperson for the court confirmed that state security forces had broken into the court.

The US National Security Council released a statement on Twitter saying, “The Maldivian government and military must respect the rule of law, freedom of expression, and democratic institutions. The world is watching.”

Opposition legislator Eva Abdulla said the state of emergency showed Mr Yameen’s desperation. “It only serves to show an isolated man who no longer has the confidence of the Maldivian people and independent institutions. He has no democratic mandate to govern and must resign immediately,” she said in a statement.

The Maldives has experienced political unrest since Mr Nasheed, the island’s first democratically-elected leader, was forced to quit amid a mutiny by police in 2012.

The following year, Mr Yameen then defeated him in an election that Mr Nasheed said was rigged. Mr Nasheed was jailed on terrorism charges but was allowed to go to Britain for medical treatment in January 2016.

He has lived in exile since and is currently in Sri Lanka. “This deliberate refusal by the government to uphold the constitution further destabilises the Maldives and wider Indian Ocean security,” he said in a statement on Monday.

Under the constitution, the declaration of a state of emergency should be submitted to parliament within 48 hours. In the event of a dispute about the declaration, the supreme court is meant to rule on its validity.

With the court effectively suspended, it was unclear how that might happen.

In its ruling last Thursday, the supreme court said it found that prosecutors and judges had been influenced “to conduct politically motivated investigations” into the allegations levelled at Mr Nasheed, former vice president Ahmed Adeeb and the other opposition leaders.

The court also ordered fresh investigations and trials to be held.

The ruling has energised an opposition that hopes Mr Nasheed will be allowed to return home to run against Mr Yameen in a presidential election due in October.

On Monday, before the emergency was declared, a minister quit in protest at the government’s defiance of the supreme court.

“It is not possible for my conscience to accept the lack of answers to the way the government is dealing with the orders of the highest court on state institutions,” Hussain Rasheed, the state health minister, said in his resignation letter.

The Maldives is made up of 26 coral atolls and 1,192 islands. Politics centres on the tiny but densely populated capital Male.– Reuters