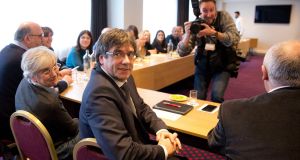 Pro-independence parties are attempting to negotiate a deal to ensure the investiture of a new Catalan president, with Carles Puigdemont determined to return to the post, possibly in a symbolic role, despite his self-imposed exile in Belgium.

Mr Puigdemont has been meeting in Brussels in recent days with representatives of secessionist parties with a view to overcoming the tensions that were highlighted last week when his scheduled investiture session was postponed.

The speaker of parliament, Roger Torrent of the Catalan Republican Left (ERC), declared the postponement, citing a lack of legal guarantees. Mr Puigdemont is wanted in Spain to face charges of sedition and rebellion and would face arrest if he returned, while the constitutional court has said he cannot be sworn in as president from afar.

Mr Torrent’s decision sparked acrimony between Mr Puigdemont’s allies and the ERC, whose support for his bid to become president had already started to waver.

But, since Sunday, members of ERC, his own Catalan Democratic Party (PDeCat) and the anti-capitalist Popular Unity Candidacy (CUP) have met with Mr Puigdemont. Together, the three parties form a narrow majority in the Catalan parliament.

The proposal being discussed suggests putting forward a new candidate, who does not face legal action, to go through the investiture procedure and hold the presidential post in the Catalan capital, Barcelona. However, Mr Puigdemont, whom the Spanish government ousted as president in October, would be sworn in at a parallel ceremony in Brussels that would make him the symbolic leader of the region, albeit with some “executive” powers.

If successful, this plan would avoid the need for a repeat of the regional election.

ERC spokesman Sergi Sabrià said on Monday that the pro-independence parties were “closer to what we all want”. Sunday marked 100 days since Madrid introduced direct rule by triggering article 155 of the constitution, and Mr Sabrià said the proposed investiture formula would force the Spanish government to return Catalonia’s devolved powers.

“This sounds good to us because it gives full recognition to the legitimate government in Brussels and it’s compatible with the end of article 155, the reinstatement of Puigdemont and the formation of a government,” he said.

Unionist parties were dismissive. Eva Granados, of the Catalan Socialist Party, said the proposal “demeans the self-governing institutions of this country”.

However, with the new secessionist initiative designed to sidestep the kind of legal action that has until now hampered the independence movement, it is not clear how the Spanish government would respond.

With the Catalan legislature in limbo, Spain’s governing Popular Party (PP) has called on the unionist party Ciudadanos, which came first in December’s election, to try to form a government, although it appears to lack the necessary parliamentary support. The PP’s Fernando Martínez-Maillo said Ciudadanos’s leader in Catalonia, Inés Arrimadas, had behaved like “a statue” since the election.

In the meantime, the supreme court’s investigation into alleged rebellion and sedition by the former Catalan government and several of its allies continues. A now famous Moleskine notebook, reportedly containing detailed notes on the planned creation of an independent Catalan state and belonging to former regional government official Josep Maria Jové, has been admitted as evidence in the case, according to La Vanguardia newspaper.