US president promises ‘a big speech, an important speech’ to Congress on Tuesday 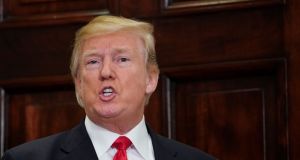 US president Donald Trump: is expected to strike a conciliatory tone in his state of the union speech, focusing on tax reform, immigration and infrastructure plans. Photograph: Mandel Ngan/AFP/ Getty

President Donald Trump promises a “big speech, an important speech” when he addresses a joint session of the United States Congress on Tuesday night. Although he delivered a similar speech in the House of Representatives last February, this is technically his first State of the Union speech.

Traditionally, the State of the Union presents the president with the opportunity to update Congress, the supreme court justices and the nation at large on his plans and policy priorities for the year ahead. Indeed, article 2 of the US constitution states that the president “shall from time to time give to the Congress information of the State of the Union, and recommend to their consideration such measures as he shall judge necessary and expedient”.

Massachusetts congressman Joe Kennedy III, the grandnephew of president John F Kennedy and grandson of attorney general Bobby Kennedy, has been chosen to deliver the Democratic response to the speech straight after Trump’s address.

The State of the Union is one of Trump’s main opportunities this year to make a pitch to the American public. While his immediate audience will be the packed chamber, the speech will be beamed live on TV channels across the country. As press secretary Sarah Sanders put it on Monday, this will “obviously be must-watch TV”. Trump’s tone will be as important as the speech’s content. Will he return to the inflammatory rhetoric of his inauguration speech last year, or will he try to strike a more moderate note?

December’s deal on tax reform was the Republican Party’s big legislative win last year so expect Trump to tout the benefits of the tax deal to the economy. In particular, the president is expected to highlight the strong economic figures that have continued into 2018.

Among the guests invited by the White House to Capitol Hill tonight is the owner of a small manufacturing company who has seen an increase in sales and employees over the past year. As a traditional Republican policy, tax reform is likely to go down well with Republicans in Congress , emerging as one of the few areas of common ground between congressional Republicans and the White House during the Trump presidency.

Trump himself has indicated that US trade policy will form part of his State of the Union address. While many will be keen to see if the president’s break with Steve Bannon, the architect of his America First policy, will tone down some of his protectionist impulses, he is likely to restate the importance of a “fair trade” deal for America. This week, negotiators from Canada, Mexico and the United States are meeting in Montreal to discuss Nafta, the free trade agreement that governs trade relations between the three countries. They will be watching Trump’s speech closely.

Just a week after the government shutdown ended after Democrats agreed to pass a funding Bill in exchange for a deal on Daca, the Obama-era law that protects young people who came to the United States as children, Democrats will be closely watching Tuesday’s speech for signs on the president’s thinking on immigration.

Some Democrats have indicated they may bring some “Dreamers”, the term for young undocumented immigrants, to Congress for the speech. The White House confirmed that guests will include families of victims killed by the MS-13 gang which comprises mostly of immigrants, a sign that Trump may take a hardline approach. But in brief comments in the White House on Monday, the president seemed to concede that the immigration overhaul will have to be bipartisan “because the Republicans don’t really have the votes to get it done in any other way.”

Trump makes the trip down Pennsylvania Avenue to Capitol Hill at a time when the Russia investigation appears to be intensifying, and a day after the deputy director of the FBI stepped down amid increasing Republican criticism of the Mueller investigation.

In addition, the White House refrained this week from putting additional sanctions on Russia, despite Congress passing a law allowing the administration to do so. Whether Trump will address the Russia investigation or Russia more generally is unclear, but he may use the speech to set out his administration’s stance on various foreign policy issues, most notably North Korea.