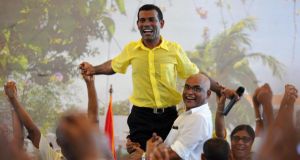 Down a narrow alley and up the stairs of an unglamorous building in the bustling island city of Malé, a slight-framed, bespectacled man sits alone at a polished boardroom table. His minute stature, reflected on the vast wooden surface under drab lighting, is accentuated. It is a scene redolent both of the new political reality in which he is swamped and his preparedness, shirtsleeves rolled, to continue pushing a controversial agenda regardless of who comes or does not come to the table.

Mohamed Nasheed, the democracy campaigner, journalist and environmental activist who in 2008 became the first democratically elected president of the Maldives – and the darling of the climate change protest movement – is once again fighting for a political foothold.

“It’s not easy to overcome a dictatorship,” he says, his high-pitched voice rising often to a squeal, his body twitching with energy. “You can change the ruler, you can change the dictator, but it’s difficult to uproot it unless you have some time in between, and unless you have a fair amount of support from others also: from the international community, from international agencies, from NGOs, from everyone. We were not able to muster that kind of international support to nurture democracy in the Maldives.”

The saga of the rise and fall of Nasheed (47), the most popular politician in this south Asian resort archipelago of 1,192 tiny, precariously low-lying coral islands necklaced in the Indian Ocean, reads like a political thriller.

Parliamentary polls in March saw his popular Maldivian Democratic Party (MDP) trounced by the old-guard Progressive Party of Maldives (PPM) led by Maumoon Abdul Gayoom, whose 30-year dictatorship was overthrown when the modernising Nasheed came to power. A reversal of democracy is under way and dictatorship once again looms, says Nasheed, who lists the rise of the surrounding waters and of Islamic extremism as the biggest threats to this Muslim nation of 26 atolls, a former British protectorate that gained independence in 1965.

“You can’t have democracy without a country.” Since the election, the government has been excoriated internationally for reintroducing the death penalty; under the law children as young as seven could potentially be sentenced. The PPM is moving towards sharia law.

Election observers of the March poll highlighted vote-buying as a major flaw. “There are many issues of voter fraud,” says Nasheed, whose calls for a boycott were voted down by his fellow MDP members shortly before polling day. “A number of ballot papers were marked by the people who voted – marked to indicate to paymasters or intimidators on how they voted.”

Electoral defeat for his party is just the latest blow. “Anni”, as he is known locally, is also no longer president, having been ousted in February 2012 in what he and the MDP say was a coup orchestrated by their own former coalition partner, the religious Adhaalath Party, and by Gayoom loyalists.

As president, Nasheed was a modern-day Mandela in the eyes of supporters, having suffered jail, torture and solitary confinement for his pro-democracy efforts. Media-savvy and charismatic, he organised a widely publicised cabinet meeting under water, in scuba gear, to highlight his country’s risk of extinction through climate change, and talked of diverting a portion of its multibillion-euro tourism revenue to buy a “homeland” for the 340,000 population, possibly in India or Sri Lanka.

Standing only slightly taller than the 1.5m (4ft 11in) average ground elevation of the Maldives (the highest point is a mere 2.4m), he became something of an eco rock star at the 2009 Copenhagen climate conference where he pledged to make the country carbon-neutral by 2020. He introduced pensions, disability allowance, support for single mothers, and the freedom of expression that had been denied him as a campaigning journalist in the 1990s. He was the subject of The Island President, an award-winning 2011 documentary by Jon Shenk.

Ironically, the freedom of expression he introduced was used to engineer his downfall. The MDP’s coalition partner was the hardline religious Adhaalath Party (faced with the choice of losing the 2008 election to Gayoom or forming a coalition with Adhaalath, Nasheed chose the latter). The choice proved a perfect opportunity for the religious conservatives, who established a ministry for Islamic affairs, tightened their grip on education, and used the freedoms of the Nasheed era to spread fundamentalist teachings. Soon they were labelling Nasheed “unIslamic”, which helped lead to his ousting.

Educated in the Maldives, Sri Lanka and Britain, Nasheed was one of the earliest and boldest critics of Gayoom, who is said to still wield much political clout. In his 20s Nasheed pilloried the regime in articles for the magazine Sangu, which was later banned, and for his troubles was jailed and tortured. Amnesty International declared him a “prisoner of conscience”. He set up the MDP while in exile in Sri Lanka in 2005.

The details of the dramatic transfer of power in 2012 are contested, but events bore the hallmarks of a coup: When weeks of street protests followed Nasheed’s arrest of a judge accused of corruption – the dictatorship-era judiciary was the new leader’s bugbear, stymying efforts at reform – some police mutinied and joined the protesters. Nasheed stepped down, saying he was forced at gunpoint to quit. His deputy, Mohammed Waheed Hassan, temporarily assumed the role of president and swiftly backed the opposition’s version of events, which was that Nasheed had resigned voluntarily.

A report by a Commonwealth-backed committee of national inquiry also concluded Nasheed had quit of his own volition, a finding he and the MDP vehemently reject. “The international community said the transfer of power was legitimate and legal. So then people lost confidence in the democratic process. And we can’t blame them either,” he says bitterly, referring to the low turnout by MDP supporters in the March parliamentary polls.

New presidential elections were held only last autumn. The first round saw Nasheed drub his opponents but left him short of an outright majority, which meant a run-off was necessary. Then, in a farcical turn of events, his old nemeses in the courts, unhappy at the result, intervened. First the Supreme Court stopped the second round from going ahead, then it annulled the first-round result on the basis of a “secret” police report that has never seen the light of day. A new first round produced a similar result, but Nasheed finally lost in the run-off to Abdullah Yameen, a half-brother of former dictator Gayoom. Nasheed surprised many by accepting defeat.

Today the MDP has only 23 out of 85 MPs in the parliament, the People’s Majlis. Three MPs elected under the party banner defected to the PPM. There is no alternative to peaceful politics, says Nasheed, but plodding the tortuous route to democracy clearly frustrates him. “I don’t think we’re losing because we don’t have support. We’re losing because we’re trying to be very nice – we’re going by procedures, democratic procedures, but this is not proving to be effective.”

He is dismayed that the international community did not support him during the coup or last year’s presidential poll. He is now biding his time. “I can’t see the coalition sticking together. This thing is going to be a mess.” His words are prescient. Within days Gayoom’s PPM dissolved its deal with the minority Jumhooree Party. Nasheed is willing to take to the streets if his MDP colleagues wish. “I’m convinced people will not give up on their aspirations.”