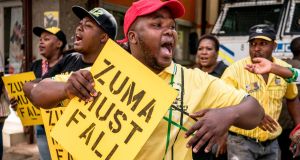 South African president Jacob Zuma’s political future could be decided on Wednesday at a special sitting of the ruling party’s national executive committee (NEC), which has been called following his refusal to voluntarily resign from office.

The decision to convene a meeting of the African National Congress’s principal decision-making body was made on Monday after the party’s top six officials reported back to senior colleagues on discussions held with Mr Zuma on Sunday.

At the meeting in his Pretoria residence, the ANC officials reportedly asked Mr Zuma to resign for the sake of party unity ahead of the general election in 2019, but he refused their request, saying he had done nothing wrong.

A statement released by the ANC after Monday’s meeting in Johannesburg to decide Mr Zuma’s fate said the NEC would meet on Wednesday to consider its next steps.

The latest developments have increased speculation in South Africa that the ANC is on the verge of forcing an end to Mr Zuma’s troubled presidency. Aside from presiding over South Africa’s recent economic decline, Mr Zuma is accused of helping the wealthy Gupta business family to illegally secure lucrative state contracts worth billions of rand.

Mr Zuma and the Guptas deny any wrongdoing, insisting they are the victims of power struggles in the ANC.

Mr Zuma’s hold on power was weakened significantly last December when he was replaced as president of the ruling party by his deputy, Cyril Ramaphosa, who has promised to fight corruption. But his term as South Africa’s president does not finish until 2019.

This has created two centres of power in the party and the country and raised tensions between his administration and the newly elected ANC leadership.

Among other things, Mr Ramaphosa’s supporters want to ensure his efforts to become South Africa’s president next year are not undermined by the presence of his predecessor, who has 783 corruption charges pending against him linked to a 1999 government arms deal.

In late January the party’s national working committee mandated the ANC’s top six officials to seek Mr Zuma’s voluntary resignation as part of a process to facilitate the transition of power to the new leadership.

Analysts have suggested the ANC may try to rid itself of Mr Zuma ahead of the president’s state of the nation address on Thursday, to avoid having a compromised president outline its plans for the coming year.

But to do this would apparently require the 88-strong NEC to officially recall Mr Zuma from office. Even if the NEC decides to do so, Mr Zuma might still refuse to go.

If Mr Zuma takes this position, he could then face removal from office through a parliamentary process such as a vote of no confidence.

On Monday EFF leader Julius Malema said his party wanted the motion debated before the state of the natione address takes place on Thursday.