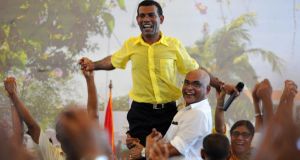 Former Maldivian president Mohamed Nasheed is greeted by supporters in Malé in February 2012, after he was ousted in a coup. He was in jailed last March to 13 years under an anti-terrorism law following a rushed trial that was condemned internationally as flawed. Photograph: Ishara S Kodikara/AFP/Getty Images

About this time last year, Mohamed Nasheed, the ousted pro-democracy president of the Maldives, stood at the doorway of his Maldivian Democratic Party’s office in Malé’s crowded downtown and predicted, matter of factly: “If you ever come back to visit us, I’ll probably be in jail.”

Today the popular leader and environmental campaigner languishes in the maximum-security Maafushi prison in what his supporters say are inhumane and unsanitary conditions. He was sentenced in March to 13 years under an anti-terrorism law following a rushed trial, condemned internationally as flawed and in breach of domestic and international rule of law.

The process and conviction, according to human rights barrister Amal Clooney, one of a team of international lawyers to take up Nasheed’s case, “could have been taken straight from Kafka”.

As a mass protest calling for his release gets under way today in the island capital, Nasheed’s supporters will be hoping that, in his hour of need, those friends he made in the international community as leader of the south Asian resort archipelago will join their campaign.

Protesters will also be calling for an end to the increasingly repressive regime of President Abdullah Yameen, half-brother of the dictator who ruled the resort archipelago of some 1,200 islands for 30 years. Yameen assumed office in 2013 after Nasheed – sworn in in 2008 after the Muslim country’s first free elections – was ousted in a coup in 2012. According to the MDP, which has joined forces with former government allies, protesters will stay on the streets for three days.

The charges against Nasheed date back to the arrest in 2012, while he was president, of an allegedly corrupt Maldivian judge, whose detention was recast by the existing government as a “terrorist abduction”.

Amnesty International said Nasheed’s trial was “deeply flawed and politically motivated” and “a travesty of justice” – but the regime governing the 1,200 precariously low-lying coral islands that make up the Indian Ocean state is impervious to criticism.

In answer to statements of concern by the UN, EU, US and UK over the lack of due process in the case, the foreign minister said the state “will not take instructions from a foreign government on any issue”.

Nasheed told The Irish Times last year of visiting Ireland while a student in Liverpool, and of his admiration for Mary Robinson and her “inspirational” work on climate justice.

During his truncated presidency, Nasheed – who earned praise across the environmentalist movement after holding an underwater cabinet meeting to highlight his country’s risk of obliteration through climate change – collaborated with Robinson and her climate justice foundation. “I am always ready to serve the very good work that she is doing,” he said.

The other big threat to his country, he warned, was Islamic extremism. Since that interview, the Maldives witnessed what is likely the world’s only march in favour of Islamic State. Last September some 300 people, including women and children, waved the black flags of the fundamentalist movement, chanted slogans against democracy and carried banners with slogans such as “Sharia is the only way” as they marched to the seafront in Malé. They then said a prayer offering support to mujahideen waging jihad around the world.

No political party endorsed the march, but the lack of opposition to it or criticism by any authority raised serious concerns among human rights and pro-democracy groups. Dozens of Maldivians have joined the Islamist movement.

The intervening year has also seen a major crackdown on opposition groups – some 200 people were arrested during the last mass protest calling for Nasheed’s release and police used batons, tear-gas and stun grenades to disperse the crowd.

Journalists have been attacked, abducted and disappeared. Climate change is low on Yameen’s priorities; his government plans to drill for oil in the Maldives’ pristine waters.

For all of these reasons, says Nasheed’s former climate adviser Mark Lynas, the Maldives’ position as chair of the Alliance of Small Island States (Aosis) is no longer tenable.

Aosis represents island nations that are most vulnerable to sea-level rises and other effects of climate change and will be taking part in the UN meeting on climate change in November in Paris.

As one of the “strongest and most morally charged voices” on climate change, Lynas wrote for the Guardian, “Aosis should come to its senses and realise that it is damaging the interests of small island states worldwide to have its collective voice represented by a regime that crushes democracy and imprisons opposition leaders.”

Yet the call of coral reefs, white (if receding) sands and beachside cocktails still appears to take priority over human rights and climate concerns – at least for those who can afford it.