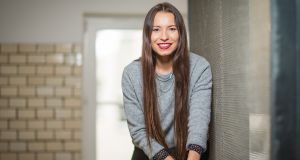 Director Anne Zohra Berrached made 24 Weeks when she learned that about 90 per cent of Down syndrome pregnancies in Germany are terminated. Photograph: Michael Hübner

The laughter stops half an hour into the German film, 24 Weeks. A comedian and her manager husband announce to family and friends they are expecting their second child, a boy, with Down syndrome.

In heartbreaking and shocking detail, the film documents the subsequent moral and emotional rollercoaster as well as reactions of family and friends. “I’m sure you’ll manage.” “Are you sure about this?” “These days, you don’t have to have children like that at all costs.”

For a country that loves to count everything, Germany is curiously imprecise about Down syndrome. Caused by an additional third chromosome 21 or “trisomy 21”, people with Down syndrome are a rare sight on the streets. Of a population of almost 83 million, just an estimated 50,000 people, or 0.07 per cent of the population, have Down syndrome. In Ireland, with about 5,000 people, they comprise 0.15 per cent.

Director Anne Zohra Berrached decided to make 24 Weeks – now available on DVD with English subtitles – when she learned that about 90 per cent of Down syndrome pregnancies are terminated.

“I didn’t know that, no one does,” she said. Two years on she is still invited to talk to women’s groups, she says, and the first thing people often ask is: “Is it really 90 per cent?”

In an uneasy compromise, Germany legislation makes abortions illegal but not prosecutable in the first 12 weeks. After that in the case of conditions such as Down syndrome, however, abortions remain possible to term. Decisive in such cases is not the diagnosis itself but the woman’s ability – or inability – to cope with the situation – and the child.

For late-term abortions after 20 weeks, not uncommon in Down syndrome cases, a lethal injection of potassium-chloride is used to stop the heart before labour is induced.

Things don’t always go to plan, as Germany learned 20 years ago with the so-called “Oldenburg Baby”. Just 690g and 32 cm, the boy born with Down syndrome survived a sixth-month termination after the doctor decided not to use a lethal injection.

His mother didn’t want to see the baby, named Tim by the father. When doctors discovered he was still alive, nine hours after birth, they began medical treatment. Today Tim lives with a foster family and, in July, will turn 21.

Heike Meyer-Rotsch, a mother of a six-year-old boy with Down syndrome, regrets what she see as an “automatism” in the German system.

“The termination is there in the room with the diagnosis,” said Ms Meyer-Rotsch, head of the Down Syndrome Berlin organisation, and mother of a six-year-old with the syndrome.

She sees Germany’s high termination rates as a self-fulfilling prophecy, caused by fear of the unknown and prejudice, caused in turn by the absence of Down syndrome in daily life.

Then there is the shadow of history that hangs over Germany’s Down syndrome debate.

From 1943 on, providing an abortion to an “Aryan” woman became a capital offence in Nazi Germany. Meanwhile, “non-Aryan” women were encouraged to have abortions, as were Aryan women who could demonstrate the child might be born with a congenital condition.

At the same time as 24 Weeks came out in 2016, German cinemas were also screening Fog in August, based on the true story of children in a Nazi-era orphanage murdered by euthanasia nurses dispensing poison-laced raspberry juice.

The Nazis murdered over 5,000 children deemed “unworthy of life”, a term that covered mental and physical handicaps but also disruptive or troubled behaviour.

German anti-abortion campaigners and Down syndrome groups see an uncomfortable overlap between Third Reich eugenics and modern prenatal testing, particularly given the high rate of Down syndrome and other abortions.

“Ethically, we find this extremely troubling because we had once in Germany this talk of ‘non-worthy’ life,” said Ms Meyer-Rotsch. “I find it threatening that a group of people are being discriminated against in the worst possible way.”

Ms Berrached says she welcomes every woman who decides for life and that they need full support.

“No woman makes this decision easily but the conflict situation is so individual that no one but they can decide,” she says.

But the director has a different take on the shadow of history that hangs over this difficult subject in Germany.

“I think the fact that a woman can decide not to have the child shows that we are modern,” she says, “and that we don’t use our history as an excuse to ban not having the child.”