Schools closed and people advised against moving around 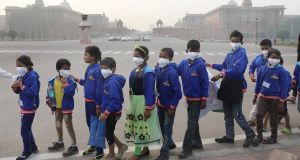 Indian children wear masks as they take part in a protest against air pollution: the city’s air quality index is 15 times over the permissible limit prescribed by the World Health Organisation. Photograph: EPA/Rajat Gupta

The party governing New Delhi, India’s federal capital, has disbursed no financial resources from the €102.5 million “Environment Cess” it has harvested from the public since January to combat the smog and pollution choking the city.

A right to information response on Wednesday indicated that Delhi’s Aam Aadmi Party (AAP) or Common Man’s Party, which stormed into power in 2015 promising change, had spent none of the surcharge it had collected in the name of cleaning up the capital’s environment.

Delhi has been experiencing its worst smog for the past fortnight. Schools have been shut down and the Indian Medical Association has declared the environment a “medical emergency”.

Even the AAP’s chief minister Arvind Kejriwal has described Delhi as a “gas chamber” and advised people against moving around and exercising in the open.

The safety limits for these pollutants are 60 and 100 respectively.

The city’s air quality index is 15 times over the permissible limit prescribed by the World Health Organisation and residents have been wheezing behind gas masks and flocking to buy air purifiers that were in short supply.

Traffic crawled along the capital’s normally chaotic streets as visibility plummeted after dark to a few hundred metres, and the city’s usually high accident rate escalated even further.

Many people have left the city unsure of their return as rival political parties trade accusations over the pollution, either downplaying or overemphasising the crisis, depending on whether they are in or out of office.

Meanwhile, the emergency deployment of helicopters to sprinkle water over Delhi in an attempt to dissipate the blinding smog has been scrapped, as the platforms are unable to operate in such low visibility.

The state-owned helicopter leasing company Pawan Hans told Delhi’s environment minister Imran Hussian that its aircraft were unable to fly. “With the prevailing smog it is not possible for the helicopters to carry out [water spraying] operations,” Pawan Hans head B P Sharma said.

Environmentalists, however, are sceptical about whether this strategy would be effective, as using fire tenders to spray water across the city to settle dust and sand particles from construction sites that contribute significantly to the smog had proven ineffectual.