Perth Letter: while the outcome to the same-sex vote was largely similar to Ireland, the process was different with polls staying open for eight weeks 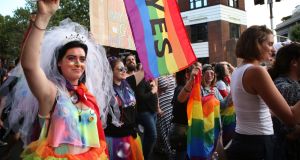 The outcome of the plebiscite on same-sex marriage was almost identical in Ireland and Australia, the yes side winning by 62 per cent to 38 per cent. But unlike Ireland, where there was a referendum and a polling day, the process here had a long tail, taking place between September 12th and November 7th.

It was also controversial, the plebiscite widely seen as evasion mechanism. Unlike the Irish vote, which changed the law, it had no legal effect and the cost, variously estimated at $90-122 million dollars (€58-€79 million), was depicted as a waste for something that opinion polls had been accurately reflecting for a long time.

There has been so much going on politically in Australia, with a government under pressure. In Adelaide, where last Sunday’s first international test took place, South Australia state elections are forthcoming. Amongst other things there has been an odd “birther” controversy that has seen elected politicians having to stand down because they held dual citizenship with another country, so the sense was the same-sex marriage issue had been talked out long before the polls closed eight weeks after they had opened.

In Melbourne, a taxi driver originally from Poland said his wife made those sorts of decisions and they would be voting no. He cited how shortly after his home country had legislated for abortion, high lying parts of the country had been flooded for the first time. “As a result?” he was asked. “Who knows,” he sighed obliquely.

Marriage has been on the political agenda in Australia to far greater extent than in Ireland. Less than 100 years ago laws were passed forbidding marriage between indigenous and non-indigenous people.

Former Australian prime minister John Howard introduced legislation in 2004 to prohibit both the introduction of same-sex marriage and its recognition if contracted in another country.

There has been an evident unease about the fact that so many other countries have legislated for same-sex marriage – even Ireland and the references have been very much of that tone – while Australia has dragged its feet.

In the voting returns, there were demographic nuggets. Just as the referendum in Ireland showed for the first time the liberal redoubts of Dublin South and Dún Laoghaire getting matched and left behind by north-city constituencies in a vote for change on a social issue, the returns in Australia illustrated that multicultural electoral areas returned the highest no votes.

ABC election analyst and well-known psephologist Antony Green said that immigrant communities hadn’t been privy to the civic debate on these issues over the past 40 years and saw them differently.

The plebiscite had even become an issue within the local football world with umbrage taken at the Australian Football League’s decision to advocate a yes vote and the resulting gusts of outrage, specifically from Footy Show blowhard Sam Newman, elicited a response from the organisation’s urbane chief executive Gillon McLachlan.

“I’m not telling anyone how to vote but what we’re saying is, this is what the AFL stands for. I say it on behalf of a playing group of which a large percentage are gay. A lot of AFLW [the women’s game] players are gay, my staff and a lot of our community and supporters,” he said.

“A core value for us, it is key to who we are and what we’ve been for a long time and what our hiring policies are and what we say about our brand, is that we are against discrimination and we are for everyone.

“The fact that some of my employees are not able to get married and others are, I think is discriminatory. Everyone will have a different view on that, but we’re entitled to represent what we stand for on behalf of our staff, our players and our community.”

It was an interesting stance given that the GAA policy on referendums is to take no public part in them and that was rigorously adhered to when referee David Gough wanted to wear a rainbow wristband when officiating in Croke Park in the months before the 2015 vote.

Matthew Pavlich, the former Fremantle footballer who played in a couple of international rules series against Ireland and who scored a goal in Croke Park in 2002, tweeted after the vote had been announced: “Yes. Good work Australia.”