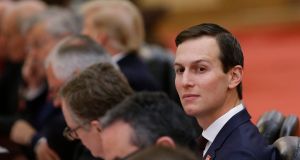 Jared Kushner shared emails within Donald Trump’s team about WikiLeaks and a “backdoor overture” from Russia during the 2016 US election campaign and failed to turn them over to investigators, it emerged on Thursday.

Senators said that a disclosure of files by Kushner, Trump’s son-in-law and senior adviser, “appears to have been incomplete” and was missing “documents that are known to exist but were not included”.

They said in a letter to Kushner’s attorney that they knew of emails received and then sent on by Kushner that appear relevant to inquiries into alleged collusion between Moscow and Trump’s campaign.

Grassley and Feinstein, the chairman and ranking member of the US Senate judiciary committee, said others had also turned over communications with Sergei Millian, the head of a Russian-American business group, which were copied to Kushner.

WikiLeaks published emails hacked from Democrats during the 2016 campaign, causing chaos in the party as it worked to elect Hillary Clinton as president. US intelligence officials have said the emails were stolen by Russian operatives.

Millian, the president of the Russian-American Chamber of Commerce, was reportedly a source of some information that ended up in the dossier compiled by the former British spy Christopher Steele on Trump’s links to Russia.