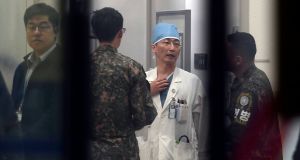 South Korean army soldiers talks with a medical doctor as he prepares to treat an unidentified injured person, unseen, believed to be a North Korean soldier, at a hospital in Suwon, South Korea on Monday. Photograph: Lee Jung-son/Newsis via AP

North Korean troops fired on a fellow soldier who was defecting to South Korea on Monday across the heavily armed border dividing the countries, South Korean officials said, amid heightened tensions over the North’s nuclear weapons programme.

The soldier was shot but succeeded in reaching the South, its military said in a statement. The North Korean soldier defected through Panmunjom, a village that straddles the border between the two Koreas. Alerted by gunshots, South Korean guards found the North Korean soldier about 55 yards south of the border line that bisects Panmunjom. He was taken to a hospital with gunshot wounds to an elbow and shoulder, South Korean officials said.

His defection took place amid a joint naval exercise involving three US aircraft carriers in waters off South Korea’s east coast. It was the first time in a decade that the US navy had mobilised three carrier groups in the same drill in the western Pacific, and it represented the show of force that President Donald Trump has said Americans “hope to God we never have to use” against North Korea.

North Korea has remained defiant, calling Mr Trump a “dotard” again on Saturday and insisting that it will never give up its nuclear weapons pursuit. More than 30,000 North Koreans have fled to the South since a widespread famine hit the impoverished North in the late 1990s. Nearly all of them have travelled through China. But a handful of North Korean soldiers and civilians have defected by crossing the 2.5-mile-wide demilitarised zone, which is guarded by minefields, sentry posts and tall fences topped with barbed wire, some electrified.

The demilitarised zone is one of the world’s most heavily armed borders. Guards on both sides stay alert against possible intruders or defectors. In 2013, South Korean soldiers shot and killed a South Korean man who was trying to cross a river at the western end of the border. In 1984, a gunfight erupted at Panmunjom when a citizen from what was then the Soviet Union dashed across the border to defect to the West. North Korean troops opened fire to stop him, and South Korean border guards fired back. One South Korean soldier and three North Korean border guards were killed.

Separately on Monday, the South Korean military said it had detained an American citizen, who had been approaching the inter-Korean border. South Korean defence, police and intelligence spokesmen all confirmed the detention of an American, but none would provide details on the record. The US embassy in Seoul said it was aware of the report but could not provide further details.

In 2014, an American was detained by South Korean troops on a riverbank near the western border after trying to swim to the North. After he was apprehended, he told officials that he had intended to go to North Korea to meet its leader, Kim Jong-un. – New York Times