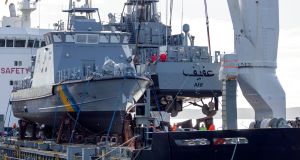 Germany exported more than €1 billion worth of arms to Egypt, Saudi Arabia and Israel in the second quarter of 2017, a fivefold rise on exports to the crisis-wracked region in the same period last year.

The figures were revealed by the opposition Left Party, which described Germany’s booming arms trade with crisis regions and problematic regimes as “reprehensible”.

Particularly problematic, according to that party’s Stefan Liebich, are sales to Egypt and to Saudi Arabia, up almost 12 times in the past decade.

Both countries, he said, “have to answer for thousands of deaths from their dirty war in Yemen” – a reference to an ongoing civil war between Yemen’s government and Houthi rebels.

A coalition led by Saudi Arabia has become involved in a conflict that has resulted in more than 10,000 deaths and created the region’s largest humanitarian crisis, with some seven million people facing likely famine.

Germany insists it operates a restrictive arms export regime, prioritising trade with EU and Nato members, and other states with similar status.

Berlin says it issues export approval “on a case-by-case basis and in light of the situation after carefully assessing or drawing on foreign and security policy considerations”.

The economic ministry has declined to comment on the nature of the booming experts to Saudi Arabia, though the recent orders are believed to include four patrol boats, lorries as well as military tools.

“There were times when it was completely out of the question for Germany to deliver weapons to countries participating in wars,” said Mr Liebich.

In 2016, Germany issued export licences for €6.85 billion worth of arms, down 13 per cent on the previous year.

According to international arms watchdog Sipri, Germany is the world’s fifth biggest exporter of weapons and its market share has shrunk by a third in the last decade.

Belarusian leader prescribes sport, sauna and vodka to beat Covid-19 17:32
Coronavirus: Spain and UK suffer highest daily death tolls 18:17
Irish in Peru: ‘There are people still stuck here and they need not to forget about us’ 08:25
Coronavirus: UK fatalities rise to 1,408 with worst thought yet to come 22:51
Covid-19: Spain now third country with more infections than China 21:43