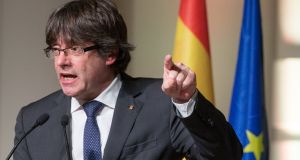 The deposed president of Catalonia, Carles Puigdemont, is due to appear in court in Brussels on Friday, where he will argue that Spain’s attempts to repatriate him are unlawful and politically motivated.

Mr Puigdemont and four former members of his government travelled to Belgium at the end of October, after the Catalan parliament had issued a unilateral declaration of independence. The Spanish judiciary wants them to return to face accusations of sedition, rebellion and misuse of public funds for their role in that proclamation and the staging of an outlawed independence referendum on October 1st.

Mr Puigdemont and his four colleagues – Meritxell Serret, Antoni Comín, Lluís Puig and Clara Ponsatí – were removed from office after the Spanish government introduced direct rule in the northeastern region. Friday’s hearing is the first since an investigating judge released them under restrictions on November 5th.

“They are being persecuted for their political opinions,” their defence team told Belgian newspaper De Standaard. “The Belgian judge should refuse to hand them over.”

The argument that Spanish authorities are pursuing the Catalan politicians for political, rather than penal, reasons will be at the heart of the defence strategy, which will also claim that technical flaws in the extradition procedure render it unviable.

In addition, the defence is expected to claim that there is potential for human rights violations if the five do return to Spain, citing a likelihood of disproportionate jail sentences and the fact that authorities would probably prevent them from campaigning in the December 21st Catalan election.

Lawyer Paul Bekaert, who has been hired by Mr Puigdemont, has previously defended several members of Basque terrorist group Eta who were the target of Spanish extradition efforts.

Two weeks ago, the Belgian lawyer told reporters that Mr Puigdemont had contracted him because he had “more than 30 years of experience in extradition and political asylum for Spanish Basques”

Mr Bekaert successfully thwarted several attempts by Madrid to extradite Eta member Natividad Jáuregui Espina from Belgium, on the grounds that her human rights were at risk. However, in 2010 he failed to prevent another member of the organisation, Luis María Zengotitabengoa, from returning to Spain to face trial.

The judge is expected to take at least several days to decide after today’s hearing. Even if extradition is approved, the defendants can appeal, potentially meaning a final decision will not be taken until January.

Although Mr Puigdemont is likely to still be in Belgium for the upcoming election, he is going to be the primary candidate for Junts per Catalunya (Together for Catalonia), an electoral list combining members of his Catalan Democratic Party (PDeCAT) and civic figures from the independence movement.

On Thursday, Catalan media reported that the second candidate on the list will be Jordi Sánchez, the president of the Catalan National Assembly (ANC), who was jailed pending trial last month.