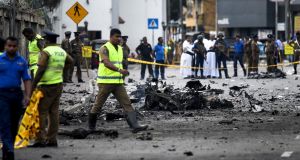 Sri Lankan security personnel inspect the debris of a car after it exploded when police tried to defuse a bomb near St Anthony’s Shrine in Colombo. Photograph: Getty Images

The confidential security memo laid it all out: names, addresses, phone numbers, even the times in the middle of the night that one suspect would visit his wife.

In the days leading up to the suicide attacks that killed nearly 300 people in Sri Lanka on Easter Sunday, the country’s security agencies had been closely watching a secretive cell of the National Thowfeek Jamaath, a little-known radical Islamist organisation that security officials in Sri Lanka now say carried out the attacks.

The security agencies had even been given specific intelligence on April 11th that the group, also known by the spelling National Thowheed Jama’ath, was planning to bomb Catholic churches. India appeared to have shared warnings with them about the group more than a week before then.

And Sri Lankan security officials knew as far back as January that radical Islamists in the country, possibly tied to the group, had stockpiled weapons and detonators.

Within hours of when three churches and three hotels were bombed, Sri Lankan security services seized at least 24 suspects, implying that they knew exactly where this group had been operating and were quickly able to locate its safe houses.

Why the security agencies failed to act before the bombings – and why some top officials, including the country’s own prime minister, didn’t even know about the intelligence that the agencies possessed – are enormous questions that have created a crisis in the Sri Lankan government.

Its history of bitter infighting appears to have contributed to a spectacular security blunder that led to one of the world’s deadliest terrorist attacks. On Monday several ministers lashed out at President Maithripala Sirisena, who controls the security services, for not acting on the detailed warnings before the attacks.

“We are ashamed of what has happened,” said Rauff Hakeem, the justice minister. “If the names of the persons involved were already known, why were they not arrested?” He called the attacks a “colossal failure on the part of the intelligence services”.

Several ministers are now calling for the national police chief to resign.

Shiral Lakthilaka, a senior adviser to President Sirisena, denied that there had been any security lapses. “Everyone has done their job. These kinds of alerts are coming time to time. Even US or anyone will not try to panic people.”

However, he added that the president had appointed a special committee, led by a supreme court judge, to investigate the matter. And he acknowledged that the warnings about National Thowfeek Jamaath – disclosed in a leaked memo from a top police official to division heads and dated April 11th – had been circulated only among police officials in charge of “VIP security”.

“That is why the president has appointed the committee to understand and ascertain what went wrong,” Mr Lakthilaka said.

The warnings appear to have gone back even further. India, a close ally of Sri Lanka’s, has been watching the entire south Asia region for any sign of activity by al-Qaeda or the Islamic State group. Indian security agencies shared specific intelligence about National Thowfeek Jamaath and the possibility of suicide attacks with their Sri Lankan counterparts as early as April 4th, two officials said.

On Monday the country remained on edge. At a crowded bus station in the capital, Colombo, police officers found 87 bomb detonators.

As mourners hung white flags around their houses and prepared to bury their dead, Mr Sirisena declared a conditional state of emergency that gave the security services sweeping powers to arrest, interrogate, search and seize.

A dusk-to-dawn curfew remained in effect. Schools were closed. So were many shops. Traffic on the main roads remained light, and tourists who visit this tropical island at this time of year were cancelling hotel bookings.