Couple who tortured 12 children in California sentenced to life

Children were rescued in January 2018

A US couple wept in court as their children read out victim impact statements - David and Louise Turpin have been sentenced to 25 years to life in prison for torturing 12 of their 13 children, ranging in age from 2 to 29 when they were found. Video: Reuters 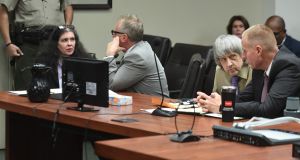 Louise (L) and David Turpin (2nd-R) pleaded guilty to 14 counts of abuse over several decades of their 13 children in a court in California. Photograph: AFP

A California couple who tortured 12 of their 13 children, starving and beating them, depriving them of sleep and sometimes shackling them to their beds with chains, have been sentenced to 25 years to life in prison.

“My parents took my whole life from me, but now I’m taking my life back,” one of the children, a young woman who is now in college, said in a statement she read to the court on Friday.

The children were rescued in January 2018 after one of the girls worked up the courage to escape by jumping from a window of the suburban Los Angeles home where they had been kept prisoner.

She called 911 from a mobile phone she had grabbed from the house and described the years of abuse to a police dispatcher.

“I’ve never been out. I don’t go out much,” the girl told the dispatcher.

She was 17, but her voice sounded like that of a much younger child, because, prosecutors said, her growth had been stunted by the abuse.

Her parents, David and Louise Turpin, are likely to spend the rest of their lives locked up.

The Turpins were sentenced after pleading guilty in February in Riverside County Superior Court to torture and other abuse and neglect so severe that it left two of their daughters unable to bear children.

The parents will be eligible for parole after the minimum time has elapsed, but Riverside County District Attorney Mike Hestrin has said that unless a parole board decides otherwise, they will spend the rest of their lives in prison. After ruining the lives of their children, he said, it was fitting justice.

The children ranged from 2 to 29 years old when they were found. Some were emaciated and appeared to have cognitive deficiencies from the abuse. Only the toddler did not appear to have been abused, authorities said. Since being removed from the home, the children are healing and beginning to live more normal lives, authorities said. The seven adult children were living together and attending school in February, when their parents pleaded guilty. The parents registered the residence as a private school, called Sandcastle Day School, and so were able to avoid questions about why their six school-aged children were not in school, authorities said. Before the children were rescued, neither law enforcement nor child protective services had had any contact with the Turpin family. – NYT