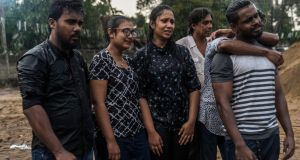 A lawyer and her two children were among the eight British victims of the Sri Lanka terror attacks, her husband has confirmed.

Anita Nicholson, son Alex (14) and daughter Annabel (11) were having breakfast at the Shangri-La hotel in Colombo when one of the seven suicide bombers struck.

Mrs Nicholson’s husband, Ben, confirmed they had been killed in a statement on Monday afternoon.

He said: “Anita was a wonderful, perfect wife and a brilliant, loving and inspirational mother to our two wonderful children.

“Alex and Annabel were the most amazing, intelligent, talented and thoughtful children, and Anita and I were immensely proud of them both and looking forward to seeing them develop into adulthood.

“They shared with their mother the priceless ability to light up any room they entered and bring joy to the lives of all they came into contact with.”

The family had been visiting Sri Lanka for a holiday from their home in Singapore. Mrs Nicholson worked for mining and metals company Anglo American, while Mr Nicholson is a partner with law firm Kennedys.

At least 290 people were killed in the explosions and more than 500 were wounded. At least 30 foreigners are among the confirmed fatalities, including those from the UK, China, Turkey, Japan, the Netherlands, China, Portugal, Australia and India.

In Colombo, St Anthony’s Shrine and hotels the Cinnamon Grand, Shangri-La and Kingsbury were targeted in the first wave of explosions shortly before 9am local time, as worshippers attended morning services and tourists enjoyed breakfast.

At about the same time, explosions were also reported at St Sebastian’s Church in Negombo and at Zion Church in the eastern town of Batticaloa.

A few hours later, two more blasts occurred just outside Colombo, one of them at a guest house, where two people were killed, and the other near an overpass.

Three police officers were killed during a search at a suspected safe house on the outskirts of Colombo when its occupants apparently detonated explosives to prevent arrest.

British MP Tulip Siddiq said she had lost a relative in the attacks.

She posted on Twitter: “It’s all so devastating. Hope everyone is keeping safe. Solidarity with the people of Sri Lanka.”

It emerged yesterday that Danish billionaire Anders Holch Povlsen lost three of his four children in the attacks.

Mr Holch Povlsen is the largest stakeholder in online fashion retailer Asos and is believed to be the largest private landowner in Scotland after buying a string of estates.

A spokesman for the businessman asked for the family’s privacy to be respected.

Kieran Arasaratnam, a professor at Imperial College London Business School, was staying at the Shangri-La.

“Everyone just started to panic, it was total chaos,” he told the BBC. “I looked to the room on the right and there’s blood everywhere.

“Everyone was running and a lot of people just don’t know what was going on. People had blood on their shirts and there was someone carrying a girl to the ambulance. The walls and the floor were covered in blood.”

Nisanga Mayadunne – who studied at the University of London, according to her Facebook profile – and her mother Shantha, a TV chef, were also reported to be among the dead. – PA