Floods kill one person and force 1,500 from their homes in Quebec province 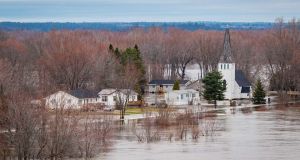 Spring flooding has killed one person and forced more than 1,500 people from their homes in Canada’s Quebec province, with waters expected to continue rising due to rising temperatures and more rain forecast for the coming days.

An elderly woman died over the weekend after rising waters washed out the road she was driving on.

The federal government said it was providing disaster response to Quebec, including hundreds of Canadian armed forces already deployed to help with sandbagging and other efforts.

“Citizens can rest assured that help will be provided,” said Canada’s public safety minister Ralph Goodale in a statement.

It is the second year of major flooding in the last three in Quebec following massive spring floods in 2017 that caused more than C$230 million (€153m) in insured damages in Quebec and neighbouring Ontario.

A spokesman for Mr Goodale said it was too soon to compare the scale of flooding to 2017, but noted that the frequency and severity of natural disasters had increased in Canada in recent years due to climate change.

The flooding has so far affected nearly 3,000 properties across Quebec, according to the Urgence Quebec website, including homes in the Montreal suburb of Laval and Gatineau, part of the Ottawa capital region.

Separate flooding in the east coast province of New Brunswick has also led to evacuations, although waters were expected to peak on Monday, according to local media reports. – Reuters

1 How a ship abandoned by its owner brought deadly cargo to Beirut
2 Covid-19 may spread more easily in schools than thought, US report warns
3 No time limits and no pre-booking: what the unpublished pub reopening guidelines reveal
4 Gardaí surrender 13 people to Polish police
5 'There is no way I would go' - Irishman in Malta cancels trip home as two weddings put off
Real news has value SUBSCRIBE