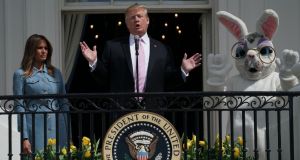 US president Donald Trump and his businesses, seeking to brush back congressional investigators, sued the chairman of the House Oversight and Reform Committee on Monday to try to quash a congressional subpoena for their financial records.

The lawsuit, filed in US district court in Washington, DC, argued that the committee’s chairman, Democrat Elijah E Cummings, had no legitimate legislative reason to subpoena an accounting company tied to the president, so his subpoena should be deemed invalid and unenforceable.

“The Democratic Party, with its newfound control of the US House of Representatives, has declared all-out political war against President Donald J Trump,” lawyers for the plaintiffs wrote in their complaint. “Subpoenas are their weapon of choice.”

The lawyers are also seeking a court order blocking the accounting company, Mazars USA, from handing over the information, which it said would “expose plaintiffs’ confidential information”.

“With this subpoena, the oversight committee is instead assuming the powers of the department of justice, investigating (dubious and partisan) allegations of illegal conduct by private individuals outside of government,” the lawyers wrote. “Its goal is to expose plaintiffs’ private financial information for the sake of exposure, with the hope that it will turn up something that Democrats can use as a political tool against the president now and in the 2020 election.”

Mr Trump and his businesses were not party to the Democratic subpoena, which was sent to Mazars earlier this month seeking financial records and communications related to Mr Trump and his businesses after Michael Cohen, Mr Trump’s longtime fixer, told the oversight committee that his former boss had intentionally misrepresented his assets and liabilities to suit his needs. Inflating the value of assets would help the Trump organisation secure loans. Deflating the value of assets would minimise tax liability.

“The committee has full authority to investigate whether the president may have engaged in illegal conduct before and during his tenure in office, to determine whether he has undisclosed conflicts of interest that may impair his ability to make impartial policy decisions, to assess whether he is complying with the emoluments clauses of the constitution, and to review whether he has accurately reported his finances to the office of government ethics and other federal entities,” Mr Cummings wrote in a memo to members of his committee at the time.

In a letter to fellow Democratic legislators, Ms Pelosi said it was “important to know that the facts regarding holding the president accountable can be gained outside of impeachment hearings”.

She added that President Trump had engaged in highly unethical and unscrupulous behaviour “whether currently indictable or not”. Top congressional Democrats have left the door open to pursuing the impeachment of Mr Trump, a Republican, but have also said they would first need to complete their own probe into whether he obstructed justice in Mr Mueller’s investigation.

“While our views range from proceeding to investigate the findings of the Mueller report or proceeding directly to impeachment, we all firmly agree that we should proceed down a path of finding the truth,” Ms Pelosi said in her letter.

“As we proceed to uncover the truth and present additional needed reforms to protect our democracy, we must show the American people we are proceeding free from passion or prejudice, strictly on the presentation of fact,” she wrote. House Democrats were due to discuss their next steps in a conference call later on Monday.

Ms Pelosi and some other Democratic party leaders have been wary of impeachment just 18 months before the November 2020 presidential election, although prominent liberals have demanded the start of proceedings to remove Mr Trump from office since the release of a redacted version of Mr Mueller’s report on Thursday.

House judiciary committee chairman Jerrold Nadler, whose panel would spearhead any impeachment proceedings, said on Sunday that Democrats would press ahead with investigations of Mr Trump in Congress and “see where the facts lead us”.

The redacted version of Mr Mueller’s report on Russian interference in the 2016 election outlined multiple instances where Mr Trump tried to thwart the probe. While it stopped short of concluding Mr Trump had committed a crime, it did not exonerate him. Mr Mueller also noted that Congress had the power to address whether Mr Trump had violated the law. – New York Times/Reuters