US parties deadlocked on immigration as shutdown looms 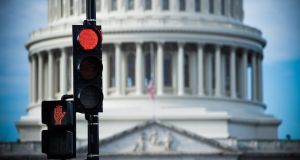 The US Capitol in Washington, DC. Photograph: Saul Loeb/AFP/Getty Images

Politicians in Washington will try to resolve deep-seated divisions on immigration in the coming days in order to avert a partial government shutdown on Friday.

Senators arrived back in Washington on Monday night for their final week of this congressional session, while the House of Representatives will reconvene on Wednesday. Some government funding – including for the department of homeland security – is set to expire at midnight on Friday if a deal is not reached on immigration.

But there was little sign of a breakthrough as the week commenced. US president Donald Trump is seeking $5 billion (€4.4 billion) in funding for his border wall, but Democrats are resisting.

Tweeting on Monday, Mr Trump said: “Anytime you hear a Democrat saying that you can have good Border Security without a Wall, write them off as just another politician following the party line. Time for us to save billions of dollars a year and have, at the same time, far greater safety and control!”

Mr Trump’s apparent intransigence over the border wall was echoed by senior White House adviser Stephen Miller over the weekend, who said that the Trump administration would be prepared to allow a government shutdown if money was not provided for the president’s proposed border wall.

“At stake is the question of whether or not the United States remains a sovereign country. Whether or not we can establish and enforce rules for entrance into our country.”

He said that Democrats can “choose to fight for America’s working class or fight for illegal immigration. You can’t do both.”

Mr Trump’s defiance continued on from his stance last week at a meeting with House minority leader Nancy Pelosi and Senate minority leader Chuck Schumer when he pledged to shut down the government over funding for his border wall.

The possibility of a one- or two-week temporary budget stop-gap measure is being looked at in Congress, though this is not supported by the White House, Bloomberg reported.

Meanwhile, further developments in the Mueller investigation into Russian interference in the 2016 election are expected in the coming days, with Michael Flynn, Mr Trump’s former national security adviser, expected to be sentenced for lying to FBI investigators.

Prosecutors disputed an argument by Mr Flynn’s legal team last week that investigators had not made it clear to him that it was a crime to lie to the FBI when he was questioned by agents.

Mr Flynn was the nation’s top security official for just 23 days before being dismissed by Mr Trump in February 2017.

On Monday, two former business associates of Mr Flynn were charged in a Virginia court with acting as an agent of a foreign government for work they did on behalf of Turkey.

According to the court filings, Bijan Kian and Kamil Ekim Alptekin illegally lobbied government officials over Fethullah Gulen, a US-based Turkish cleric whom Turkey is trying to extradite.

Their indictments came as a Senate report revealed new details about how Russia interfered in the 2016 presidential election by using every major social media platform to influence voters.

The report, which was released on Monday, is the most wide-ranging analysis of the scope and scale of the Russian interference to date. Compiled by the University of Oxford’s Computational Propaganda Project and the social network analysis firm Graphika, it reveals how Russia delivered text, images and videos to users on platforms including Twitter, Instagram, YouTube and others to try to swing the election in favour of Mr Trump.

They said that accounts created by Russia’s Internet Research Agency were still active, though the report contains no new information about the scale of any Russian interference in last month’s midterm elections.

A second report prepared for the Senate intelligence committee also highlighted how the Internet Research Agency targeted left-leaning African-American voters in a bid to discourage them not to vote.