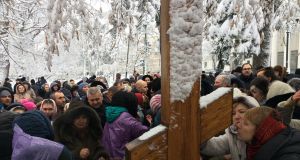 Ukrainians loyal to the Moscow Patriarchate of the Orthodox Church held prayers outside parliament in Kiev on Friday. Photograph: Dan McLaughlin

As snow fell steadily on Mariinsky Park outside Ukraine’s parliament on Friday, Kiev police kept a watchful eye on a benign-looking crowd gathered at a wooden cross beneath the trees.

“We are saying prayers here to ask God to help us clerics and the laity through these difficult times for the church,” explained local Orthodox priest Fr Serhiy, as snowflakes dusted his black robes and beard.

“We are against the state interfering in church affairs, and it is written in black and white in the constitution that they should be separate,” he added.

“The church is like a ship, and if you change its course by just a few degrees it can be lost,” he warned. “For those who raise their hand against the church and try to change it, things always end badly.”

Peaceful though the prayer-protest was, it took place amid heightened tension on the eve of a historic church council in Kiev that will deepen a rift in the Orthodox world and, some fear, could inflame the conflict between Russia and Ukraine.

Followers of the Moscow Patriarchate branch of the Ukrainian Orthodox Church, like Fr Serhiy, reject a council at which a new, rival church will be created under the green-and-gold domes of the 11th-century St Sophia’s cathedral.     It will combine the current Kiev Patriarchate, the Ukrainian Autocephalous Orthodox Church (UAOC) and willing bishops from the Moscow Patriarchate and – if all goes according to plan – it will be granted independence from the Russian church next month by Bartholomew, Ecumenical Patriarch of Constantinople.

In October, Bartholomew decreed an end to 332 years of Russian authority over Ukraine’s religious affairs, prompting Moscow to cut ties with the Istanbul-based patriarchate that is traditionally “first among equals” in the Orthodox world.

The Kiev Patriarchate and UAOC broke with the Moscow Patriarchate in the early 1990s, but antipathy between churches that are seen respectively as pro-Ukrainian and pro-Russian has grown over four years of undeclared war between the two states.

The Moscow Patriarchate still controls more churches in Ukraine, but scores have switched sides since Ukraine’s 2014 revolution and Russia’s subsequent aggression, and polls suggest that the Kiev Patriarchate now has the greater number of followers.

For many Ukrainians, including President Petro Poroshenko, the creation of a national, independent church will represent a historic stride away from Russia, and weaken the influence that Moscow can exert through one lever in this “hybrid” war.

Russian clerics, meanwhile, predict a bloody fight for control of monasteries in Ukraine, where the Kremlin has vowed to “defend the interests” of followers of the Moscow Patriarchate.

Russian deputies branded Ukraine “a terrorist state” that was waging “war against ethnic Russians and Russian speakers”, and warned that it would face “an appropriate response . . . and catastrophic consequences” if more violence erupted.

Hostility has grown in recent weeks, as Ukraine’s security service (SBU) searched Moscow Patriarchate churches and questioned some of its clerics over suspected incitement of religious hatred.

“Very serious things are happening now in brotherly Ukraine: we know how the forces of evil have risen up against the Orthodox Church,” Russian Orthodox Patriarch Kirill said in a sermon this month.

“It cannot be allowed,” concluded Kirill, who has written to the United Nations’ secretary-general, German and French leaders, Pope Francis and the Archbishop of Canterbury to ask them to intervene over Ukraine.

Tight security will surround Saturday’s unification council, which comes after Ukraine declared martial law in some regions following Russia’s capture of three of its naval ships and 24 crewmen in the Black Sea last month.

“God forbid that there will any incidents at the council, or any escalation,” Metropolitan Makariy, the head of the UAOC, told Radio Free Europe this week.

“I fear it could happen. I also pray that our northern neighbour doesn’t rub his hands and rejoice that we Ukrainians can’t manage to agree on some shared thing. We must agree.”

About 100 people prayed with Fr Serhiy outside Kiev’s parliament, and then sang hymns and bowed their heads to kiss the wooden cross before drifting away through the snowy park.

“Politicians shouldn’t be interfering in the spiritual world,” said Nina (54), reflecting a widespread feeling that Poroshenko hopes church independence will boost his chances in elections next March.

“Everyone knows that the way to the Orthodox Church is through repentance. But now they are breaking our backs to put us under the authority of Byzantium,” she added, referring to the Constantinople Patriarchate.

“This new ‘church’ won’t be a church but a political organisation,” added her friend Natalya (52).

“We have a church already and you can’t mix us all up. If you mix clean and dirty water, it all turns murky.”

Galina, another follower of the Moscow Patriarchate who wore an icon around her neck, turned with a final word as she set off home: “Let the church traitors meet tomorrow,” she said. “But I don’t want anything to do with them.”