Can green investments save the economy? The EU thinks so 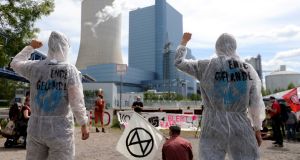 When the European Commission sets out its plan next week for a recovery fund to dig the bloc out of an economic downturn it expects to be the worst in a century, it aims to combine several ambitions at once.

The European Union’s executive body has made it clear that it believes massive spending is needed to counter the slump, and has proposed a fund of a trillion euro for this. It wants the money to go towards transforming the bloc in the way it believes it needs to go anyway: towards a digital economy and carbon neutrality by 2050 to ward off catastrophic climate change.

A draft policy paper leaked to media and seen by The Irish Times lays out thinking in Brussels on how this could be achieved. Here are the main points:

Buildings are responsible for 36 per cent of greenhouse gas emissions in the EU, according to the paper, and are inefficient, losing a lot of heat due to lack of insulation. It proposes making as much as €350 billion available for renovations, starting with public buildings such as hospitals, schools and public or low-income housing. “Green mortgages” could then be made available for private offices, farms and homes, that would allow for the purchase and renovation of properties at low interest rates.

Investing in farming and rural areas

Farmers can produce renewable energy through capture of animals’ methane emissions, produce biogas from other waste and residue, and harvest wind, solar, and biomass energy, the paper notes. It proposes investing €4 billion over two years for such projects.

Farmers could also be paid to store carbon: it proposes €14 billion for initiatives like reforestation, restoring peatland, and soil management.

In addition, it states that some €130 billion is needed to develop adequate broadband in rural areas, and €35 billion for the digitalisation of the agri-food sector over the next two years.

Investment in non-polluting vehicles is a “win-win” as it would both cut transport emissions and help build a strong, clean automotive manufacturing sector, the paper reads. It proposes investments of €20 billion for clean vehicles, €40-60 billion for zero-emission trains, and building two million public charging and alternative refuelling stations by 2025. Additional investments would boost rail infrastructure and cycling facilities.

Hundreds of thousands of jobs could be created by the development of waste management and recycling, according to the paper, both in technological research on re-use of materials and in labour-intensive sorting of waste. Many member states are unlikely to reach a target of recycling 50 per cent of municipal waste by this year, and just six per cent of plastics used in the EU are recycled, the paper notes.

Work is ongoing within the commission to draw up its final draft plan for the recovery fund. This is expected to be announced next week, before it is likely to be fiercely debated by national leaders, who must ultimately sign off on the plan as well as the European Parliament.