Nearly 60% fewer children in hospitals in some areas during Covid-19 peak, says consultant 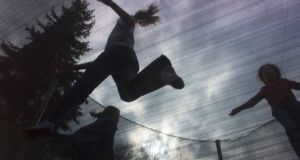 Crumlin hospital reported a rise in the number of children being treated for trampoline injuries. Photograph: David H Wells/Aurora/Getty Images

Usually springtime would see a rise in injuries from contact sports such as GAA or rugby training but in recent weeks the children’s hospital in Crumlin has seen more children presenting with head injuries from household falls or trampoline use.

There was also a surge at the hospital in April of young children presenting with accidental ingestions of medicines and household items.

“We noticed the spike in those ingestions really from the day the schools closed,” said Dr Carol Blackburn, consultant in paediatric emergency medicine at Children’s Health Ireland in Crumlin, who says there has been a change in the types of injuries or illnesses among children who go to hospital. “It’s understandable: everyone is at home trying to work and look after children at the same time. Those numbers have settled a bit now but we are still up on the baseline.”

Dr Blackman told RTÉ Radio’s News at One that while injuries from organised sports injuries are down, the hospital has been experiencing an increase in injuries from domestic environments such as falls in the home, trampolines or falls off bicycles.

“We have seen an increase [in trampoline injuries], it’s part of an overall picture, we’re doing research here looking at the change in the origin of the injuries that we’re seeing at the moment from March to May this year at a time of Covid compared to previous years.

“While it’s hard to have absolute numbers because it’s still a work in progress we saw well over 80 trampoline injuries in April which would be up on a similar period last year. About 10 per cent of the injuries that we’re seeing at the moment are actually due to trampoline related injuries. They tend to be a combination of things - they could be as serious as an elbow fracture or more minor strain type injuries as well.

“We had been concerned that parents were keeping their children at home for fear of coming to a hospital that might be perceived as somewhere they might pick up Covid, but we did issue appeals that we were open for business.

“During a time when attendances dropped off we were still seeing the same proportion of children with high acuity illnesses in that time. So it wasn’t our experience that children with serious illness stayed away.”

The number of children in hospitals, meanwhile, dropped by nearly 60 per cent in some areas at the height of the coronavirus pandemic, with many families reluctant to visit healthcare settings because of the risk of contracting the virus, according to Dr Alan Finan, consultant paediatrician at Cavan General Hospital.

The number of children presenting with respiratory viruses, which are common during the winter months, also significantly dropped following Taoiseach Leo Varadkar’s decision to close all schools and creches in mid-March, said Dr Finan.

“We found general paediatric illnesses reduced by probably 50-60 per cent starting the third week of March, it was quite a dramatic fall,” Dr Finan told The Irish Times. “Our interpretation is primarily that kids haven’t been at school or play group or creche and so haven’t been sharing the normal viruses.”

Doctors were concerned that some children who needed medical assessments were being kept home because of the perceived risk of the disease in hospitals, said Dr Finan. “I had a couple of cases where kids were due blood tests and clinical examinations and the parents cancelled. I had to phone them to persuade them to come in. In most instances they agreed but in a couple of cases they didn’t.”

Hospitals are taking every possible precaution to avoid the spread of the virus, said Dr Finan. “When we’re seeing a child face to face we’re very mindful of that risk and careful about using PPE [personal protective equipment] and maintaining physical distancing between patients in waiting rooms.

“The level of risk of people coming to a hospital is actually very low in terms of Covid-19. I think they’re probably at more risk in the supermarket than in here.”

Like in other hospitals, doctors in Cavan have been conducting online clinics since March. Even though speaking over Zoom is not the same as carrying out an assessment in person, Dr Finan says the online alternative has been important in maintaining contact with patients.

However, telephone clinics are not a long-term solution, he adds. “If you don’t see patients face to face there will be things missed. It’s important we get back to seeing patients in person.”

Crumlin hospital did not witness the same dramatic drop in attendances as Cavan given that it was also dealing with additional patients from Tallaght hospital, which temporarily relocated its paediatric services to Crumlin and Temple Street for the duration of the pandemic, said Dr Blackburn.

The virus, however, has not been a major issue in Crumlin, she says. “Those children who did test positive did not require ICU treatment, we’ve been fortunate with that.”

Like Dr Finan, she says the number of children attending hospitals has started heading back towards normal levels. However, Dr Blackburn urged parents to consider bringing children with less urgent or acute injuries to Connolly Hospital Blanchardstown.