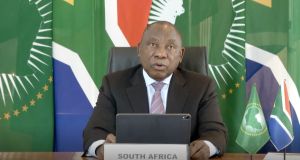 South African president Cyril Ramaphosa delivering a speech via video link at the opening of the World Health Assembly virtual meeting from the WHO headquarters in Geneva. Photograph: AFP via Getty Images

South Africa’s strict lockdown measures will be further eased from the start of June, but President Cyril Ramaphosa has warned that the country’s coronavirus outbreak is expected to get much worse.

In a televised address on Sunday, Mr Ramaphosa said all of South Africa would ease restrictions from June 1st despite a recent surge in Covid-19 cases that saw the country record about a third of all its confirmed infections over the past week.

As of Sunday, South Africa had 22,583 confirmed cases and 429 virus-related deaths.

Mr Ramaphosa’s decision to ease the lockdown, which was one of the world’s strictest, opens up the beleaguered economy to much more industrial activity and gets an additional eight million people back to work.

The move from the current level four restrictions to level three also allows people more freedom to move about their communities while maintaining social distancing measures.

Under the new regulations, citizens can exercise when and where they want to but not in groups, and the existing night-time curfew will be fully lifted. All manufacturing, mining and construction can also fully reopen, as can financial, professional and business services, including IT.

Domestic business air travel will be phased in, but international travel remains off limits except for emergencies. Classes will also re-start for children in the last years of primary and secondary school.

Economists have estimated that between one and three million jobs will be lost and the economy will contract by at least 6.1 per cent as a result of the lockdown, which was first implemented in South Africa on March 27th.

The Economic Freedom Fighters disagreed with it because of the dangers that loosening the regulations poses to people susceptible to the disease, while the Democratic Alliance said the government should not have extended the lockdown beyond its initial three weeks in the first place, as little had been gained from it.

During his address Mr Ramaphosa warned that easing the lockdown did not mean the threat caused by the virus had passed. “The coronavirus pandemic in South Africa is going to get much worse before it gets better,” he said.

Last week scientists working with the government warned that at least 40,000 people could succumb to the virus by the end of the year.

The president added about a dozen locations – primarily in South Africa’s three largest cities – had been identified as virus hotspots, and unless they improved the areas would return to a higher lockdown level.

Mr Ramapahosa also said the government had used the last 10 weeks to prepare the health system for the expected surge in infections, with 20,000 hospital beds now repurposed for Covid-19 cases. He added that 27 field hospitals had been built as well.