Jacindamania sweeps Labour back into contention in New Zealand

She might have ‘the worst job in politics’, but the popular leader has made light work of it 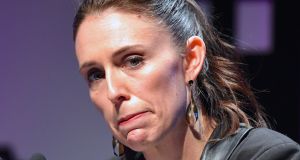 When Labour Party candidate Greg O’Connor says “this is an election like no other”, he is not exaggerating. Three party leaders, including his own, have resigned during the campaign and there are still four weeks to go before New Zealanders go to the polls on September 23rd.

A month ago Labour looked dead in the water, stuck on 23 per cent in polls and heading for a fourth straight election loss to the National Party under prime minister Bill English. Then Andrew Little unexpectedly resigned as Labour leader and was replaced by 37-year-old Jacinda Ardern.

When she took over on August 1st, Ms Ardern said: “Everyone knows that I have just accepted, with short notice, the worst job in politics.” It may have been, but she has made light work of the task – the latest poll has Labour on 37 per cent and the National Party on 40.

Under New Zealand’s mixed-member proportional (MMP) voting system, this makes the election too close to call. Each voter gets two votes, one for a local candidate and one for a political party. With 49 of parliament’s 120 seats filled from the party list, having a popular leader is vital, and Ardern fits that bill to the point of the phenomenon being called Jacindamania. She has been helped by the collapse in the Green Party vote following coleader Metiria Turei’s resignation after admitting to welfare fraud in the past.

The third party leader to resign was United Future’s Peter Dunne, who has held the Auckland seat of Ohariu for 33 years. Dunne told the New Zealand Herald newspaper the polls had him far in front until Ardern took over as Labour leader. “It was a bit like taking the cork out of a bottle and making it all come out. And that’s a pretty tough tide to fight,” he said. Labour’s O’Connor is now favourite to win Ohariu.

Since MMP replaced the first-past-the-post system in 1996 no party has won a majority in New Zealand. The centrist United Future and the conservative New Zealand First party have each been part of governments led by both National and Labour. United Future’s days look numbered (Dunne was its sole remaining MP), but New Zealand First is likely to retain most of its 11 seats and be kingmakers.

With the economy growing at 2.5 per cent and unemployment at 4.8 per cent, it might be surprising that there is any mood for a change in government. There is also broad agreement on taxes, even if the parties phrase their policies differently: National says it won’t lower taxes and Labour says it won’t raise them.

But the environment is a major point of difference. At Labour’s campaign launch last Sunday, Ardern said climate change was “my generation’s nuclear-free moment and I am determined that we will tackle it head-on”. The statement cleverly both emphasised her youth and referenced how in 1984 New Zealand barred nuclear-powered or nuclear-armed ships from using its ports or entering its waters.

Ardern challenged the view that small countries can’t make a difference to climate change. “I don’t accept New Zealand is a country at the bottom of the world that can’t play its part, particularly when we have the Pacific on our doorstep and they are so affected.”

Sexism reared its head when radio presenter Mark Richardson asked Ardern if she planned to get pregnant in the future (she has no children). “If you are the employer of a company you need to know that type of thing from the woman you are employing ... The question is, is it okay for a PM to take maternity leave while in office?”

Ardern was praised for her unequivocal response. “That is unacceptable in 2017. It is a woman’s decision about when they choose to have children. It should not predetermine whether or not they are given a job or have job opportunities.”

Bill English and the Nationals have been strangely mute since Ardern became Labour leader. All their war-gaming for the election was based on facing the lacklustre Andrew Little as the alternative prime minister. English now looks lacklustre in comparison to both Ardern and John Key, the former prime minister he replaced just eight months ago.

But English is still favoured as prime minister by 45 per cent to Ardern’s 32. The under-29s prefer Ardern but are less likely to vote. We will know in a month if Ardern’s charisma can turn personal energy into political power. Right now, the momentum is with her and Labour, and the National Party is running out of time to get a handle on Jacindamania.