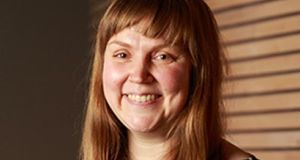 Eva Johanna Holmberg: was told she had a month to leave the UK by the British home office. Photograph: Queen Mary University of London

The British home office has apologised after it mistakenly sent up to 100 letters to EU nationals living in the UK ordering them to leave the country or face deportation.

One of the letters was publicised on social media by a Finnish academic who believed she was about to be forced to leave, prompting the government to admit it had sent 100 or so letters threatening recipients with deportation, and warning that they could face detention under the Immigration Act.

The home office could not confirm how many went to EU nationals, but said that all were from within the European Economic Area.

The error emerged after Eva Johanna Holmberg, who has lived in the UK with her British husband for most of the last decade, spoke of her dismay at receiving one of the letters, which said that if she did not leave the country of her own accord the home office would give “directions for [her] removal”. It added that she was “a person liable to be detained under the Immigration Act”.

Holmberg, a visiting academic fellow from the University of Helsinki at Queen Mary University of London, was told in the letter that she had a month to leave. After the Guardian asked the home office for clarification of her situation it immediately backtracked and said the letter was one of about 100 sent by mistake.

“A limited number of letters were issued in error and we have been urgently looking into why this happened,” a spokesperson said. “We are contacting everyone who received this letter to clarify that they can disregard it. We are absolutely clear that the rights of EU nationals living in the UK remain unchanged.”

The British government had previously told EU nationals they did not need to apply for residency because their status was not at risk.

Home Office wants to deport a Finnish academic who is married to a Brit and pays taxes in Britain, i.e. me. https://t.co/4zpS1ENlW9

After the mistake came to light, the home office called Holmberg to “apologise profusely”, she said. But the person who telephoned her would not confirm that the government would cover her legal costs of about £3,800. “The best way to apologise and ease my distress would be to cover my expenses,” she said. The home office would not say whether it intended to cover the costs of those who received the letters.

Holmberg added that the situation was evidence of serious failings at the home office. “I believe this is a case of incompetence,” she said. “They don’t have enough resources to handle their application procedures and there is, so to speak, a fault inbuilt in the system.”

Before receiving the news that the deportation order had been issued in error, Holmberg described her horror at the threat to her UK status.

“It seems so surreal and absurd that I should be deported on the grounds that I’m not legal. I’ve been coming and going to this country for as long as I remember,” she said. “I don’t know what kind of image they have of me but it’s clearly quite sinister based on the small amount of info they actually have on me.”

Holmberg had lived in the UK without complications for some time, but on the day Theresa May triggered article 50 she applied for a “qualified person certificate” to confirm her right to remain in the UK for her own “peace of mind”.

But her application was refused on June 29th because the “University of Helsinki [is] not located in the UK, therefore you are not employed in the UK”.

Holmberg said: “I thought that it seems that they don’t even know what’s going on and that a new system is coming soon so I thought I’ll just wait until they sort themselves out and figure out what kind of documentation and proof is needed. So I spoke to my husband and friends and decided to just leave this; at least I don’t have to leave the UK – it’s OK.

“I realise that I probably shouldn’t have done that because last Thursday I get this notice saying: ‘A decision has been taken to remove you from the UK.’

The scale of the home office error will unsettle EU nationals who have been previously told by the government to stay calm and wait to apply for the right to remain until new systems are put in place next year.

About 3.5 million EU citizens live in the UK, and many of them have described their anxiety over the possibility of their deportation since the Brexit vote.

James McGrory, the executive director of the pro-EU lobby group Open Britain, said: “It’s little wonder that many EU citizens feel worried about their future status in the UK when they hear of people with every right to be here getting letters threatening their deportation.”

Holmberg said the Brexit vote had come as a shock to her. “I tend to be an optimistic person so on the night of the result I decided I’d go to sleep and wait for the result in the morning,” she said. “My husband, who was less optimistic, stayed up all night and watched it unfurl. The irony is that he was actually interviewed by the Finnish media on the day and he said: ‘I’m worried this will make my life and my wife’s life more difficult,’ and they were prophetic words.”