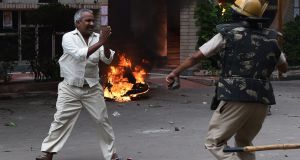 A follower of Indian religious leader Gurmeet Ram Rahim Singh pleads for his safety after being hit with a stick during clashes between the controversial guru’s followers and security forces in Panchkula on Friday. Photograph: Money Sharma/AFP/Getty Images

At least 30 devotees of a self-styled Indian “God Man” died and more than 200 were injured in rioting and clashes with police across northern India on Friday within hours of him being convicted on two charges of rape.

Officials said the rioting erupted in Panchkula in Haryana state, 250km north of New Delhi, minutes after Gurmeet Ram Rahim Singh (50) was declared guilty of raping two women at his ashram, the headquarters of his sect, in 2002.

Thereafter, the violence spread to neighbouring Punjab and Himachal provinces and the federal capital Delhi, where Singh’s supporters stormed police barricades, attacked media vans and burned vehicles, including a bus and a fire engine and two empty train carriages.

Within hours, the army was deployed in Panchkula to restore order, as thousands of local police and paramilitaries were unable to control the overnight crowd of Singh’s followers , which had swelled to nearly 200,000.

The unrest resulted in a curfew being imposed across several northern cities, including parts of Delhi, and the situation remained tense until late evening.

A judge of the Special Central Bureau of Investigation said Singh, who heads the Dera Sacha Sauda or Place of Truth sect in Sirsa, 260km north west of Delhi, would be sentenced on Monday.

He has been taken into police custody and airlifted to a nearby town and housed in luxurious quarters in a bid to calm his supporters.

Legal analysts said the burly and bearded Singh, a flamboyant man who has a rock star image, could face a seven-year jail sentence.

Singh scripted and starred in his own film, Messenger from God, in which he hurls burning motorcycles and sings raucous songs. He claims a following of more than 60 million devotees worldwide, but stands accused by former sect members of surrounding himself with about 400 castrated bodyguards. He reportedly claims that castrations bring his followers’ “closer to God”.

The rape allegations, which Singh denied, first surfaced in an anonymous letter sent to the Indian prime minister in 2002. Scrutiny of the ashram grew when a journalist investigating Dera Sacha Sauda was shot dead the same year.

Prior to his conviction on Friday, the state authorities in Haryana and neighbouring Punjab state had, in a bid to contain anticipated unrest, suspended Internet services to curb social messaging.

They had also imposed a curfew, but to no avail as thousands of supporters milled around the court in Panchkula after Singh arrived in a 200-car cavalcade. He travelled in a bulletproof Range Rover escorted by cheering disciples.

The website of Singh’s ashram says it is a “social welfare and spiritual organisation that preaches and practices humanitarianism and selfless services to others”.