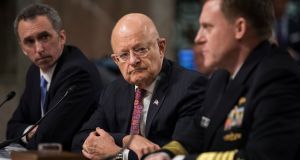 James Clapper, director of national intelligence for seven years under Barack Obama, questioned the US president’s “fitness to be in this office” after his demagogic performance in Phoenix, and expressed anxiety about Trump’s power to launch nuclear weapons without consulting Congress or any other official.

Once a president has verified his identity with a code kept constantly on his person or nearby, the military chain of command has no power to block his launch orders.

“Having some understanding of the levers that a president can exercise, I worry about, frankly, the access to the nuclear codes,” Clapper told CNN, pointing to the current stand-off with North Korea.

“In a fit of pique he decides to do something about Kim Jong-un, there’s actually very little to stop him. The whole system is built to ensure rapid response if necessary. So there’s very little in the way of controls over exercising a nuclear option, which is pretty damn scary.”

Clapper did not mention Richard Nixon, who was involved in a tense stand-off with North Korea in 1969, after the regime shot down a US spy plane. Nixon is reported to have gotten drunk and ordered a tactical nuclear strike, which was only averted by his national security adviser, Henry Kissinger.

Nixon’s biographers, Anthony Summers and Robbyn Swan, quoted a top CIA official, George Carver, as saying: “The joint chiefs were alerted and asked to recommend targets, but Kissinger got on the phone to them. They agreed not to do anything until Nixon sobered up in the morning.”

Clapper joined a growing chorus of alarm over Trump’s erratic behaviour. The Republican chairman of the Senate foreign relations committee, Bob Corker, said last week that Trump “has not yet been able to demonstrate the stability nor some of the competence that he needs to demonstrate in order to be successful”.

Freaked out yet? Support HR 669 by @EdMarkey & me. Prevents @POTUS from launching nuclear 1st strike without Congressional authorization. https://t.co/aRGj52v2nU

On Capitol Hill, a Democratic congressman and senator have introduced a bill

that would prohibit the president from launching a nuclear first strike without a declaration of war by Congress.

In the wake of the Phoenix speech and Clapper’s remarks, one of the bill’s authors, Congressman Ted Lieu tweeted “Freaked out yet?” and called Congress to support the bill.

that the rally showed “shades of 1933 Germany”.

Clapper, who stood down as DNI in January, pointed out that he had served the US under every US president from John Kennedy to Barack Obama, having joined the Air Force in 1963.

“I don’t know when I’ve listened and watched something like this from a president that I found more disturbing,” he said. “Having some understanding of the levers of power that are available to a president if he chooses to exercise them I found this downright scary and disturbing.

“How much longer does the country have to, to borrow a phrase, endure this nightmare?” Clapper asked, and expressed hope that other Republicans would join Corker and “reach the point where enough is enough”.

Trump is reported to have fallen out with the Senate majority leader, Mitch McConnell, whom he is said to have berated in a foul-mouthed telephone call for failing to protect the president from the investigation into his campaign’s relationship with the Kremlin during the election campaign. The growing investigation, led by former FBI chief Robert Mueller, is often cited privately by White House officials as driving Trump’s wilder angry outbursts.

Bruce Blair, a former missile launch officer, warned last week about the president’s untrammeled power to start a nuclear war. He voiced concern over Trump’s threats against North Korea, vowing the country would never be allowed to field a missile capable of striking the US mainland and declaring that “fire and fury like the world has never seen” would befall Pyongyang if it continued to threaten the US.

“Nuking another country just because it seeks to acquire nuclear weapons enjoys virtually zero support from US nuclear troops,” Blair wrote in a Washington Post commentary. “Yet Trump indulges in issuing such threats, and he has unchecked authority to order a preventive nuclear strike against any nation he wants with a single verbal direction to the Pentagon war room.”

Blair is now a research scholar in Princeton University’s Program on Science and Global Security and a founder of Global Zero, a movement calling for the elimination of nuclear weapons.

“ Under the current nuclear strike protocol, [Trum] can consult any and all - or none – of his national security advisers, and no one can legally countermand his order,” he wrote.

“If he gave the green light using his nuclear codes, a launch order the length of a tweet would be transmitted and carried out within a few minutes. I could fire my missiles 60 seconds after receiving an order. There would be no recalling missiles fired from silos and submarines.”