Islamic State adds a layer of sophistication in Europe 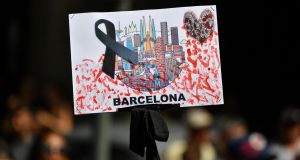 A placard with a black ribbon is brandished on Las Ramblas in Barcelona, Spain, following the recent terror attack on the street. Photograph: Pascal Guyot/AFP/Getty

Though Islamic State claimed responsibility for twin attacks that killed 15 people in Spain last week, the level of involvement by the “caliphate” is not yet clear.

Eight suspected jihadists are dead and two others are in custody. They may have been trained and dispatched by Islamic State (Isis), also known as Daesh. They may have been “remote controlled” by an Isis handler who never met them. Or they were perhaps self-starters, led by a radical imam who was merely inspired by Isis.

The large number of jihadists, the indications that they planned a spectacular target (the Sagrada Familia cathedral), that two of the jihadists made a lightning trip to Paris days before the attacks, and that the imam, Abdelbaki Es Satty, had lived in the Belgian town of Vilvoorde, frequented by other Isis operatives, seem to indicate a high degree of involvement by Islamic State’s external intelligence service, the Amn al-Kharji.

“Daesh put a high priority on attacking in the West from the very beginning. It’s been a constant,” says Jean-Charles Brisard, president of the Centre for the Analysis of Terrorism in Paris.

The group’s first attack in Europe was staged by a Franco-Algerian called Mehdi Nemmouche on May 24th, 2014, a month before Abu-Bakr al-Baghdadi declared the “caliphate”. Before he shot dead four people in the Jewish museum in Brussels, Nemmouche spoke by telephone to Abdelhamid Abaaoud, the Moroccan-Belgian Islamic State official who planned and participated in the November 13th, 2015, attacks that killed 130 people in Paris, according to Brisard and press reports.

Amniyat means “security” in Arabic and is often shortened to Amni or Emni. Islamic State has several distinct intelligence services, for spying on its own people, for military security and for external operations.

Amn al-Kharji, the service that organises attacks in Europe and elsewhere abroad, is divided into regional directorates targeting Europe, the Arab world and Asia, according to media reports and experts interviewed for this article. Abaaoud, who was shot down by French police five days after the Paris attacks, headed the European branch.

Abu Muhammad al-Adnani, who was killed in an air raid one year ago, was Islamic State’s spokesman and the head of Amn al-Kharji. He foreshadowed truck attacks in Nice, Berlin, London and Barcelona in a famous speech in September 2014. In the translation published online by the blog Jihad Watch, Adnani said one must kill non-believers in any way possible. “Smash his head with a rock, or slaughter him with a knife, or run him over with your car, or throw him down from a high place, or choke him, or poison him.”

Experts differ on the importance of Adnani’s role in the attacks, but agree that his death was a blow to the jihadists. “He was Isis’s most charismatic figure, and each of his speeches was like a new Beatles album for the greater terrorist movement,” says Graeme Wood, a correspondent for the Atlantic and author of The Way of Strangers: Encounters with the Islamic State, published by Penguin.

“That [Adnani] is no longer alive matters a lot. Those speeches are no longer coming, and he hasn’t been replaced by a comparable name-brand,” Wood adds.

Isis announced last December that Adnani had been replaced as head of propaganda by someone called Abu Hassan al-Muhajir, about whom virtually nothing is known. It is not clear whether Adnani’s replacement is also in charge of the Amn al-Kharji, though the two functions are interwoven.

The man now in charge of Islamic State’s terrorist operations may in fact be a US citizen and convert to Islam called John Georgelas, according to an investigative report excerpted from Wood’s book and published in the Atlantic.

The son of an affluent Greek-American family, Georgelas converted to Islam in the wake of the September 11th attacks in the US, learned Arabic well, developed a small following and settled with his ex-wife and children in the town of Azaz, a few miles from the Turkish border, in northern Syria.

Abdelhamid Abaaoud was emir of foreign fighters in the town around the time that Georgelas lived there in 2013, under the name Yahya Abu Hassan, according to Wood. Georgelas later moved to near Aleppo, and then, in 2013, to Islamic State’s “capital” of Raqqa, under the name Yahya Abu Hassan. He was reportedly close to Adnani, was wounded in the Syrian war and in the past used the nom de guerre Abu Hassan al-Muhajer. (A muhajir signifies a foreign fighter who has joined Isis.)

What Daveed Gartenstein-Ross, senior fellow at the Foundation for Defence of Democracies in Washington, DC, calls “the virtual planner model” has been Islamic State’s most striking innovation. “It was enabled by the combination of the rise of social media and the advent of end-to-end encryption,” says Gartenstein-Ross. “The virtual planner attempts to fill all the roles that a physical network played, without even meeting the operatives in person.”

Experts suspect that many “lone wolves” are in fact guided by Islamic State via encrypted messaging apps such as Telegram and WhatsApp, which cannot be deciphered.

The French citizen Rachid Kassim, killed in an air strike last February, was a famous virtual planner. Kassim “remote-controlled” two young Frenchmen who slashed the throat of a priest in Normandy in July 2016. In September, three would-be female jihadists were brought together by Kassim for a failed car-bombing outside Notre Dame Cathedral, according to Gartemstein-Ross and press reports.

Transcripts of a social media “chat” between a suicide bomber in Ansbach, Germany, and his virtual planner in Isis, in July 2016, show how the system works. The bomber got cold feet because of heavy security around a concert. The planner told him, “Forget the festival . . . Hey man, what is going on with you? Even if just two people are killed, I would do it. Trust in God and walk straight into the restaurant.”

The suicide bomber, a Syrian refugee, was the only fatality. He wounded 15 people, four seriously.

Another virtual planner, the British-Pakistani Junaid Hussain, was killed in August 2015. Hussain was previously a computer hacker and married Sally Jones, a former punk rocker. The Telegraph newspaper reported that after her husband’s death, Jones was put in charge of training female recruits from Europe.

So what is next? Isis has already staged dozens of chemical attacks in Syria and Iraq. As shown by the failed attack at Notre Dame, they are prepared to use women.

Gartenstein-Ross says the ability of jihadists to exploit improvements in consumer technologies, for example end-to-end encryption, makes prospects for future attacks in Europe “extraordinarily grim”. He is convinced that Islamic State or al-Qaeda will use a commercially produced drone to stage an attack within years. “For each new technology, there is someone out there trying to think of a way to use it to kill someone,” he says.

The current issue of Inspire online magazine published by al-Qaeda in the Arabian peninsula includes 18 pages of step-by-step instructions for derailing a train. “O Mujahideen,” the magazine says, “It is time that we instil fear and make them impose strict security measures to trains as they did with their air transportation.”