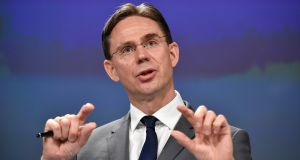 European commission vice-president Jyrki Katainen: With cohesion/regional and agriculture funding amounting to over 70 per cent of the EU budget, both programmes will bear brunt of Brexit cutbacks. Photograph: John Thys/AFP/Getty

Countries in central and eastern Europe will be paying for the recent success and growth in their economies with sharp cuts in EU cohesion funding, reflecting their improved standing in the EU’s wealth league.

The price of success for Poland, Hungary, the Czech Republic, Estonia and Lithuania will be cuts of 23-24 per cent in their receipts in real terms in the proposed post-2020 EU budget, according to figures published by the European Commission on Tuesday. All would have fallen far further had it not been for safety net caps on individual member state allocations

Ireland will see its allocations cut by 0.2.per cent in absolute terms, and 12 per cent in real terms – its total allocation for the seven-year period will be €1.1 billion (in 2018 prices).The commission said it would maintain commitment to peace funding for the North.

The shifting allocations enormously compound the political difficulties faced by the commission in getting its €373 billion cohesion budget agreed unanimously by member states for the post-Brexit 2021-2027 period – it is already 10 per cent down because of the loss of income from the UK.

With cohesion/regional and agriculture funding amounting to over 70 per cent of the EU budget, commission vice president Jyrki Katainen told journalists it was inevitable that both programmes would bear the brunt of Brexit-driven cutbacks.

But he insisted that the allocation key was set predominantly on the basis of regional gross domestic product per capita, with the balance made up of labour market criteria (unemployment, population shifts, migration) and climate change.

Caps were set on the amount states could lose – 24 per cent – and gain – 8 per cent – to ensure that there were no unmanageable shocks to economies. Poland would otherwise have faced a cut of up to 45 per cent – in practice, however, the reduction is of €19.5 billion compared to the 2014-2020 period, when Poland was allocated a total of €83.9 billion in 2018 prices.

There is, however, a gathering storm in the “losing” countries with politicians suggesting they are being victimised for their refusal to take in their shares of refugees.

That contention is robustly rejected by regional policy commissioner Corina Cretu, who pointed out the new budget would actually see a small increase in spending in the least developed regions – more than 75 per cent of the cohesion budget.

“No one should be dissatisfied,” she insisted, “if they had improved . . . The richer you are, the less cash you get. In the end, it’s all a good thing.”

The effect of the reallocations will be to see a shift in cohesion funding between the EU’s east, “new Europe” and the south where the effects of the 2008 economic crash have still not worn off. But Mr Katainen insisted there had been no political decision involved – that was simply the way the figures worked out.

Ms Cretu said they were also reforming the funding. It would be simpler to access, more flexible, and there would be more input from local authorities, particularly cities. There would be a prioritisation in regional and cohesion funding  of innovation, support for SMEs, digital technologies and industrial modernisation, with support for the regions most needing to catch up.

Funding would also go “to the shift towards a low-carbon, circular economy and the fight against climate change”, she said. Some €1.6 billion would be targeted to the “outermost regions” of the EU, such as the far north.