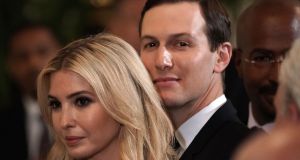 Ivanka Trump won approval from Beijing for five new trademarks as her father, Donald, announced he was working on a deal to drop US prohibitions against Chinese mobile phone maker ZTE, sparking further questions about conflict of interest at the White House.

The trademarks, which are potentially worth millions of dollars, were issued by the State Administration for Industry and Commerce (SAIC) and are for items including kitchenware, furniture and cosmetics.

Both Ms Trump and her husband Jared Kushner work as senior advisers in the Trump government, and the trademarks come as Mr Trump is holding trade talks with China on a number of issues. China and the US are currently trying to stave off the threat of a trade war over China’s massive trade surplus with the US.

According to the SAIC, at least five trademarks were green-lit and these can be used on a variety of products, such as rugs or bath mats.

Other trademarks granted subsequently can be used for businesses such as textiles, household utensils, furniture and other items.

Earlier this month, Mr Trump tweeted how he and Chinese president Xi Jinping were “working together to give massive Chinese phone company, ZTE, a way to get back into business, fast. Too many jobs in China lost. Commerce Department has been instructed to get it done!”

Lawyers quoted by state-run Chinese media sought to play down the significance of the trademark deals.

“It’s highly likely to be just a coincidence that the US worked with China to ease their trade tensions after Ivanka Trump’s trademarks got approval,” Hao Junbo, lawyer at Beijing-based Hao Law Firm, told the Global Times.

Another lawyer from the Internet Society of China, Zhao Zhanlin, said: “Considering the large number of trademark applications from the Trump family in China, it’s normal that Ivanka Trump applied for new trademarks,” he said.

The Global Times story quoted a contractor in her factory in the southern Chinese province of Guangdong saying that orders had increased since last year.

“Though the company keeps a low profile, we can see the business grow in our factory,” the contractor, who requested anonymity, said.

In June last year, three activists from the China Labour Watch group were detained while investigating working conditions at factories that make shoes for Ms Trump and others.

There were accusations of conflict of interest against Mr Trump himself early in the presidency after the Chinese granted the Trumps dozens of trademark approvals shortly after he entered office.