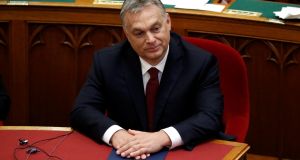 Hungarian prime minister Viktor Orban: the Bill would allow jailing of NGO workers who help people who are not eligible for asylum in Hungary. Photograph: Bernadett Szabo

Mr Orban’s government submitted the proposals to parliament in Budapest yesterday, less than two months after his Fidesz party won a landslide re-election on pledges to block immigration and crack down on NGOs, especially those financed by liberal Hungarian-American billionaire George Soros.

The so-called “Stop Soros” Bill would allow the authorities to jail NGO workers who help people who are not eligible for asylum in Hungary. In contrast to earlier versions, however, the latest draft of the Bill does not propose compulsory security checks for NGOs that work with migrants or a 25 per cent tax on their foreign funding.

“Those who provide financial means . . . or conduct this organisational activity on a regular basis will be punishable with up to one year in prison,” said the official text of the proposals. “We need an action plan to defend Hungary and this is the Stop Soros package of Bills,” the interior ministry added in a comment.

Mr Orban has led central European opposition to immigration since 2015, when his increasingly nationalist government built fences on its borders to keep out refugees and migrants as more than a million sought to settle in the EU.

The UN refugee agency (UNHCR) urged Mr Orban yesterday to drop the Stop Soros Bill, saying it was “seriously concerned that these proposals, if passed, would deprive people who are forced to flee their homes of critical aid and services, and further inflame tense public discourse and rising xenophobic attitudes”.

“Seeking asylum is a fundamental human right, it is not a crime . . . We are particularly concerned that the government is targeting those who, in a purely humanitarian role, help people who are seeking asylum,” said Pascale Moreau, director of the UNHCR’s Europe bureau.

Mr Soros said yesterday that the 2015 migration crisis had been exploited by “unscrupulous leaders . . . in countries that have accepted hardly any refugees”.

“[Mr Orban] is now posing as the defender of his version of a Christian Europe that is challenging the values on which the European Union was founded,” Mr Soros said, two weeks after his Open Society Foundations announced it was moving from Budapest to Berlin.