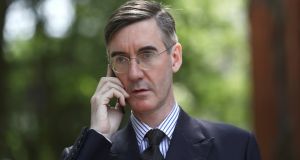 Conservative MP and Brexit-supporter Jacob Rees-Mogg: “Planning for no deal ought to be an essential part of the negotiations strategy.” Photograph: Simon Dawson/Reuters

Downing Street has criticised EU negotiators for “negative anonymous briefings” after an official in Brussels suggested that Britain was “chasing a fantasy” about its post-Brexit relationship with the EU. Theresa May’s official spokesman on Tuesday dismissed the comment, adding that it was important the negotiations should remain constructive.

“As the Brexit secretary said last week, we need to approach these discussions with the interests of our citizens at heart. That means focusing on holding constructive talks inside the negotiation room. We also need to be constructive outside of the room, which means looking beyond soundbites and negative anonymous briefings,” the spokesman said.

“We have made good progress so far, achieving sufficient progress in December and reaching agreement on the financial settlement for example. However, it is also important to remember that nothing is agreed until everything is agreed. It is imperative that we keep these talks constructive and continue to make more progress towards the deep and special future partnership that is in the interests of both the UK and the European Union. ”

The spokesman confirmed that Britain is likely to be involved in negotiations about the EU’s next, seven-year multiannual financial framework (MFF), which runs to 2027. But he insisted that such consultations did not imply that Britain would continue to make large payments into the EU budget for years after Brexit.

“Negotiations on the next MFF are primarily a matter for the 27 remaining member states, but there are a number of areas where it will be in the UK and Europe’s mutual interest to have engagement, such as on issues relating to the design of the next framework and its programmes,” he said.

“The prime minister has been clear that we will want to continue working together in ways that promote long-term economic development and the security of our continent, including participating in EU programmes where it is in our interests.”

Downing Street rejected a newspaper report suggesting that its planning for a no-deal Brexit was so inadequate that the prime minister would be unable to walk away from the negotiations without an agreement. Ms May’s spokesman said that £3 billion had been set aside in the budget for Brexit planning covering all scenarios.

Jacob Rees-Mogg, who chairs the European Research Group of Eurosceptic Conservative backbenchers, warned on Tuesday that failure to plan properly for a no-deal Brexit could weaken the prime minister’s negotiating hand in Brussels.

“Planning for no deal ought to be an essential part of the negotiations strategy. To show we could easily walk away would worry the EU, strengthening our position and failing to do so would be both incompetent and weak,” he told the Sun.

Later, during a phone-in programme on LBC radio, Mr Rees-Mogg dismissed a caller’s suggestion that British voters should be given an opportunity to reverse Brexit if they changed their minds about it after seeing the final deal with Brussels.

“If, in 30 years’ time, the UK wants to rejoin, that would be a matter for the electorate then. But this result must be respected and it must be implemented, otherwise we would find our democracy held in as much contempt as that in Greece and Italy by the EU,” he said.