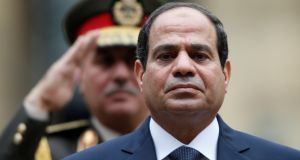 For the past decade, Wael Abbas has been a fierce critic of Egypt’s authoritarian leaders, using YouTube to highlight police torture, and building up a huge Twitter following that he used to draw attention to the plight of dissidents who had vanished into state custody.

At dawn last Wednesday, the knock came on his own door. Armed security officials burst into Abbas’s Cairo home, blindfolded him and whisked him away, relatives said. Before vanishing, he punched out a short message on Facebook: “I am being arrested.”

If similar cases are a guide, it could be months or years before he can post again. Egyptians who hoped that President Abdel Fattah al-Sisi’s thumping victory in the March presidential election – when he won 97 per cent of votes in a deeply flawed poll – would encourage the authoritarian government to soften its crackdown on dissent have been disappointed.

In fact, Sisi has gone in the opposite direction, arresting Abbas and other activists in the past month, in what appears to be an effort to silence even the small number of critics still inside Egypt, including some who had already started to self-censor out of fear of arrest.

“The crackdown on free speech human rights defenders seems to be intensifying,” Marietje Schaake, a Dutch member of the European Parliament, said on Twitter. “I expect European leaders to speak out firmly.”

Among those arrested in the past month were a satirist who got in trouble in 2016 for pranking policemen by giving them balloons made from condoms; a woman who complained on Facebook about being sexually harassed in a bank; and a trade union activist who kept a low profile in recent months.

“The difference with this crackdown is that it’s going in every direction,” said Hossam Bahgat, a prominent journalist and human rights activist. “They appear to have a list of people they are going after, based on their public profile rather than anything they have said. It’s scary.”

Military courts have taken up some cases, often imposing harsh sentences on dissenters. On Tuesday, human rights activists said a court sentenced Ismail Iskandarani, a researcher and writer, to 10 years’ imprisonment on a raft of charges including membership in a banned organisation.

Iskandarani is a scholar on Sinai, where the Egyptian army is waging a military campaign against the Islamic State terror group without much outside scrutiny because journalists and researchers are forbidden to enter the area.

Last week, Human Rights Watch said the army had destroyed at least 3,600 homes and commercial buildings in the area since January as part of its drive against the Islamic State in Sinai. An Egyptian military spokesman denounced the report and said the government had paid $51 million in compensation to affected families.

Many Egyptians activists have won international awards for their work in recent years. But western accolades or large social media followings offer little protection from prosecution in Sisi’s Egypt. Amal Fathy, the woman who railed against sexual harassment, is a former actor and model.

In an expletive-studded video posted on Facebook, she vowed to leave Egypt with her son this summer. “I will take him and get out. Anyone who stays here can burn with the country,” she said. “Screw the police.”

A few days later Fathy, her husband and their two-year-old son were taken to a police station in the middle of the night. She is awaiting trial on charges of inciting terrorism over the internet and spreading fake news. There was no word last week of the charges faced by Abbas (43), whose lawyer described his status on Twitter as “kidnapped, not arrested”.

Abbas came to prominence in 2006 after he posted leaked videos of police brutality under president Hosni Mubarak, one of which resulted in the conviction of two officers. In 2007, the Washington-based International Centre for Journalists presented Abbas with the Knight International Journalism Award. In recent years he has used his Twitter account, which has 350,000 followers, to attack Sisi.

“It’s rich that activists like Wael Abbas won awards for their contestation on social media,” she said, “and the sites were credited for their role in revolutionary events. And today, these same sites are the ones that are silencing folks.”

A spokesman for Twitter declined to comment on the case, and referred to the company’s rules. – New York Times