Future of Spanish prime minister Rajoy in the balance 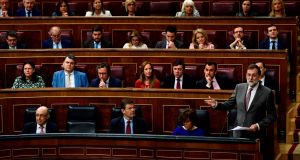 When Mariano Rajoy addresses parliament on Thursday to defend himself against a no-confidence motion, it won’t be the first time in his nearly seven-year tenure that the Spanish prime minister’s position has looked in jeopardy.

The loss of his parliamentary majority in a general election in 2015 led many observers to predict the end of his premiership. Yet after months of political paralysis, he won a rerun of the election and formed a new government, albeit a minority one.

In addition, for the last half-decade, Rajoy (63) and his conservative Popular Party (PP) have been fending off serious corruption allegations, which have led to embarrassing headlines and, last summer, an unsuccessful no-confidence vote triggered by the leftist Podemos against his government.

But while his ability to ride those storms has earned the prime minister a reputation as a stubborn survivor, this upcoming parliamentary motion could be a challenge too far for the Galician.

“For the first time, the desire for change [in parliament] appears greater than the desire to avoid instability, which had been the factor keeping Rajoy in power until now,” said José Fernández-Albertos, a political scientist at the National Research Council.

The motion has been brought by the Socialist Party, which says a high court sentence last week implicating the PP in a kickbacks-for-contracts network makes Rajoy and his party unfit to govern.

Most other parties seem to agree, although the result of the motion, which is due to be voted on come Friday, is still unclear.

The stakes are raised by the fact that if the Socialist initiative wins, the party’s leader, Pedro Sánchez, will automatically become prime minister. Rajoy has dismissed the move as being driven by Sánchez’s personal ambition, warning that the forces that might vote to remove him from power would result in a “Frankenstein government”.

On Wednesday, in the final congressional session before the no-confidence motion debate begins, Rajoy accused the opposition of being “Torquemadas” and he highlighted the need for political stability in order to keep Spain’s economic growth on track. Rajoy sees his supervision of the country’s economic recovery as his main achievement. The domestic turmoil of recent days, along with that in Italy, has unsettled Spanish markets.

But while last week’s court sentence has left Rajoy isolated, Spain’s fragmented political landscape and territorial crisis complicate Sánchez’s attempts to gather the 176 votes he needs in the 350-seat chamber.

He appears to have the support of Podemos, but in order to secure the absolute majority required, they will also need the backing of Catalan and Basque nationalists.

Catalan pro-independence parties welcome the opportunity to remove Rajoy, who introduced direct rule in their region in October and has steadfastly refused to discuss with them the possibility of holding a referendum on secession. But they also have reservations about Sánchez, who has labelled the new, pro-independence Catalan president, Quim Torra, a “supremacist” and compared him to French far-right leader Marine Le Pen.

Torra performed a U-turn on Tuesday, which should prompt the Spanish government to lift direct rule in Catalonia: he replaced four contentious choices as regional ministers, all of whom are in exile or in jail, with candidates who are more acceptable to Madrid.

However, there is still a degree of resistance within the Socialist Party itself to the idea of winning a parliamentary motion with the help of separatists. “Right now, the [Catalan] independence movement worries me a lot more than whatever the PP has stolen,” said Socialist veteran Juan Carlos Rodríguez Ibarra.

Even if the Catalan secessionist parties do support the motion, the five seats of the moderate Basque Nationalist Party (PNV) are expected to have the final say.

Sánchez has said that if he wins, he is willing to call a general election, although he has not specified when. The only party confident of making electoral gains is Ciudadanos, whose strident unionism throughout the Catalan crisis has seen it soar into the lead in many national opinion polls.

Ciudadanos has ruled out supporting this no-confidence motion, instead calling for a snap election, a plan Podemos appears willing to support if Rajoy wins on Friday.

The Basque nationalists must weigh up all these issues as they decide how to cast their key vote. The PNV has little sympathy for Rajoy, but fears that if Ciudadanos ends up governing it will cut back long-standing financial privileges the Basque region has enjoyed from Madrid and further polarise the territorial debate.

With four parties now vying for power, Spain’s parliament is more fractured than it has ever been since the return to democracy. Until now, that had prevented a coherent opposition from forming and allowed Rajoy to remain in control, despite his party’s disintegrating credibility. But even if he gets through Friday’s vote, it looks as if the Spanish prime minister’s knack of surviving could finally be about to fail him.